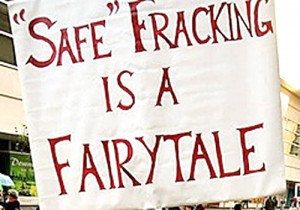 Remember when proponents of nuclear power said that it would generate electricity “too cheap to meter”.

The hype surrounding fracking is heading in the same stratospheric direction.

This morning the former forecasting head of the Organisation of Economic Cooperation and Development is arguing that the shale gas revolution could half the price of oil in the next decade.Dr John Llewellyn described the invention of “fracking” as “game changing technology”

What is interesting about this is that oil prices in the US – where fracking is revolutionising the energy sector –is that gas prices reached a record high last year.  As an article in the Wall Street Journal noted last week: “The U.S. oil boom is finally affecting global energy prices — but don’t expect cheap prices at the pump as a result.”

It all boils down to simple supply and demand. The oil industry is a global market and the price is reflected in that. And if China and other economies keep growing, the price is not going too far south any time soon.

Meanwhile, in the UK, the fracking frenzy reached fever-pitch last week when a long-awaited survey by the British Geological Survey estimated that there could be about  1,300 trillion cubic feet of shale gas in the northern Bowland basin.

But how much of this is eventually recoverable is anyone’s guess. Even British government ministers admit the amount may be substantially lower.

But this has not stopped the frenzy reaching fever pitch. Yesterday, David Davis, the former Conservative Home Secretary, wrote in the tabloid Daily Mail newspaper that fracking was “Clean, cheap, plentiful and safe”

Davis may know a thing or two about crime statistics, but he clearly does not know anything about energy markets. Nor does he know much about science.

Last month, research was published by scientists from Duke University’s Nicholas School of the Environment in the US which was published in the Proceedings of the National Academy of Sciences.

The scientists analysed 141 drinking wells located within 1 kilometre of fracking wells in northeastern Pennsylvania. What they found should worry anyone concerned about fracking.

Fracking’s proponents will argue that this is not conclusive proof of contamination by the controversial technology as no baseline survey was undertaken, but the distance to gas wells was the most significant factor in the contamination.

Some may argue that, in the UK at least, not many people get water from private wells compared to mains water, but if fracking was to contaminate groundwater aquifers then millions of people could be affected.

It also means that when politicians say that fracking is safe, it is at best wishful thinking, at worst, a lie. But then so was the promise of electricity which would be too cheap to meter.