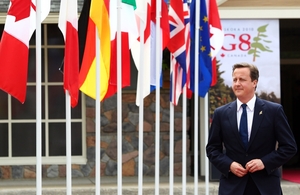 Next week at the G8 meeting in Northern Ireland world leaders will focus on three main themes, summed up by 3 words beginning with T: trade, tax and transparency.

But now you can add a fourth T to the list: tar sands.

The main three themes of the summit are advancing international trade; ensuring tax compliance and combatting tax evasion; and promoting greater transparency for governments and corporations.

But whilst world leaders put their minds to matters of international importance, like tax evasion, Canada’s Prime Minister Stephen Harper is going to use the meeting to bend the ear of President Obama on the Keystone XL pipeline.

In fact, Harper is using the gathering as the latest venue on the Canada’s lobby tour to push their dirty tar sands. Tomorrow, Harper will be met by demonstrations outside the British parliament when he addresses both the House of Lords and Commons. Yesterday I blogged how the British government, by inviting Harper, was condoning the cultural genocide being caused by tar sands expansion.

But the Canadian press is reporting that it is expected that Harper will also use the G8 summit next week to look to seek a bilateral meeting with US President Barack Obama to talk about the Keystone XL pipeline.

And whilst transparency of governments is on the main agenda for the summit, we are unlikely to get the minutes of that meeting.

Harper’s Government has stepped up its lobbying in Washington in recent weeks, running adverts in Washington D.C. newspapers, along with launching a new government website which rather outrageously argues Canada is a “world environmental leader”. Sentiments like that show just far from reality Harper’s government is.

And the reason that Harper is getting desperate is that there is increasingly evidence that without the Keystone XL pipeline, the tar sands might not be economically viable. According to a research report written by Goldman Sachs earlier this month, the “potential for Canadian heavy crude oil supply to remain trapped in the province of Alberta is a growing risk for the 2014-2017 period depending on the timing of new pipeline start-ups.”

This analysis not only shows how high the stakes are for Harper, but also undermines the American State Department’s own review of the pipeline.

Even the oil industry know admits that Keystone is key. “If that added capacity from Keystone XL isn’t brought online, there’s potential for a gap between production and delivery,” argues Grady Semmens, a spokesman for TransCanada, the company which wants to build the pipeline.

And that is why Harper will literally be chewing at Obama’s ear, desperate for the American President to give him the nod that the pipeline will be built.

For Harper, the issue of tax evasion can wait, the tar sands comes first.