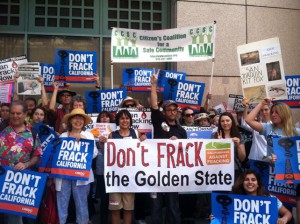 The State of California is fast becoming the front line in America’s fracking wars.

Underneath the central and southern parts of the Golden State lies the huge Monterey Shale, which could hold millions if not billions of recoverable oil if you believe the oil industry hype. The reserves are said to be over 2.5 times as large as the deposits in North Dakota.

The debate about the safety and environmental impact of fracking in the state has been brewing for a while. Back in April researchers argued that California needed to strengthen fracking regulation, identifying a number of shortcomings in oversight of the controversial practice. They called the uptake in fracking activity in the State “potentially alarming.”

The researchers from the UC Berkeley Center for Law, Energy and the Environment, argued that that new regulators were not adequately to deal with a potential fracking boom. “Hydraulic fracturing presents risks to our environment and human health, and must be properly regulated and controlled,” the authors wrote. “This report identifies several areas where the state’s knowledge base and existing regulatory scheme are deficient.”

The researchers called for greater investment in industry oversight, stronger regulations, and heightened inter-agency cooperation, as well as greater transparency and increased accountability across all fracking operations.

Over the last month pressure has been building on State Governor Jerry Brown to ban the practice. However last week, the power of Big Oil was out in force when the Californian State Assembly voted 35-24 to kill a bill originally designed to halt fracking throughout the state. If the bill had passed it would have halted fracking and mandated a review of the risks it poses to the environment and public health.

To coincide with the vote, last Thursday there was a protest against the controversial technique attended by the anti-fracking film maker Josh Fox, whose new film Gasland 2 has just opened. Fox was joined by farmers, environmental and consumer organisations and people living near fracking wells who came together to form a new protest group, Californians Against Fracking.

Carrying a banner reading “Don’t Frack the Golden State,” protesters handed in a 100,000 signature anti-fracking petition to Governor Brown who has recently claimed that fracking would be a “fabulous economic opportunity”.

“I’m proud to be involved with the launch of Californians Against Fracking and stand next to environmental leaders, advocates and ordinary people fighting to protect the Golden State from the dirty and dangerous processes of fracking and drilling,” said Fox.

The demonstration came after a new poll found that fewer than half of Californians – just 39 percent – favoured an increased use of fracking.  The same poll found that a massive 70 percent of likely voters believe the state government is “pretty much run by a few big interests looking out for themselves,” rather than for the benefit of all Californians. These “few big interests” are headed by the Western States Petroleum Association, the largest and most powerful corporate lobby in California, which has spent $16 million lobbying in Sacramento since 2009 alone.

However, campaigners are vowing to keep up the pressure on Brown and further bills to ban fracking could be back on the agenda late this year or early next year.

They many take inspiration from the City Council of Boulder in Colorado, which yesterday unanimously approved a one-year fracking moratorium.