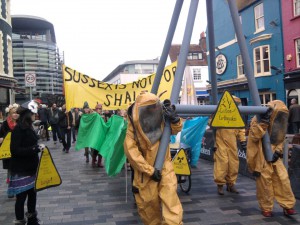 So the hype around Britain’s shale gas potential continues. According to a new report from the business lobby group, the Institute of Directors, the UK’s shale gas reserves could “be a new North Sea for Britain”.

These reserves could meet over a third of the country’s annual gas needs, generate a whole lot of extra tax revenues and in excess of 70,000 jobs in the areas of the country where they are most needed, they contend.

Based on a recovery rate of 10 per cent, this could mean that recoverable resources might equal 30.9 trillion cubic feet, equivalent to two-thirds of Britain’s potentially recoverable conventional gas reserves. That, says the IOD, is one hell of a lot of gas.

The IOD is arguing for the fiscal infrastructure and political will to happen for these reserves to be exploited as soon as possible. ‘It is important to spell out what could be possible”, Corin Taylor, the author of the report told the Financial Times, “otherwise there is a danger we will not address all the challenges to make it happen.”

Indeed, the current full scale of the UK’s prospective shale gas boom was laid bare last week, after the government confirmed that over 330 licences for onshore oil and gas exploration have now been granted. Of these, some 60 are thought to be “substantial”.

At the time Energy Minister Michael Fallon said: “Shale gas has great potential and we have the right regulation in place so the UK benefits as quickly as possible in terms of energy security, investment and jobs.”

But not everyone agrees with the hype. Leila Deen, an energy campaigner at Greenpeace, dismissed the IOD report as “wildly optimistic”, which was based on “mind-boggling” forecasts and “hopelessly misleading estimates of gas extraction.”

Deen also argued that the report assumes a level of gas use that is incompatible with the recommendations of the UK government’s own climate advisors.

But it seems that the Government is set to ignore concerns over climate change and soon announce new tax breaks for shale gas and fracking.  The British Prime Minister David Cameron even went as far as telling US business leaders in New York earlier this month that he was “pretty jealous” about America’s fracking industry.

Maybe Cameron’s government and the IOD should catch a glimpse of Josh Fox’s new movie, Gasland 2, which is set for release in July.

Steve Horn from DeSmogBlog, who helped with the film, has seen a sneak preview. Writing yesterday he noted how the new movie depicts how America’s fracking “boom is busting up peoples’ livelihoods, contaminating air and water, polluting democracy and serving as a ‘bridge fuel’ only to propel us off the climate disruption cliff.”

And whilst America charges over the cliff, the UK, acting like a blind lemming, looks set to follow..