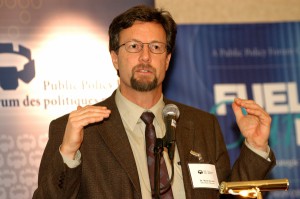 Oliver ended his tour by attacking anyone who disagrees with his government’s crusade to exploit the dirty tar sands.

He argued that the opponents of tar sands and Keystone XL pipeline are desperate” with “shrill arguments” coupled with “hyperbole” and “exaggeration.”

In fact it is the Canadians who seem to be getting desperate. Hot on Oliver’s heels, Canada’s Environment Minister Peter Kent will be in Europe this week. Meanwhile the Canadian Prime Minister, Stephen Harper will be on yet another trip to the States, this time in New York City arguing about the so-called benefits of the tar sands

But Oliver and Kent are not the only Canadians to be touring Europe. Mark Jaccard, one of Canada’s leading energy economists, from British Colombia’s Simon Fraser University, is embarking on a European tour of his own, criticising the Canadian government’s plans for the tar sands.

Internationally, Jaccard is known for his work on the Intergovernmental Panel on Climate Change since the nineties, and he was named the British Columbia Academic of the Year in 2008.

Jaccard too has been attacked by Oliver, who really is beginning to act more and more like the play-ground bully.  This has led Jaccard to say that the Canadian government’s campaign of aggression and name-calling is not winning it any respect. “I feel betrayed as a Canadian,” he says.

Jaccard will be joined in Europe by another of Joe Oliver’s bette noirs, Dr James Hansen, the former director of the NASA Goddard Institute for Space Studies and one of the world’s leading climate scientists. The two will visit Brussels, Berlin, Paris and London. Anyone interested in the London event on Thursday, go here.

The worrying thing for the Canadians is that more and more people – including leading scientists – are publicly criticising them:

Last week, Jaccard was one of a dozen leading Canadian climate scientists who openly criticised Oliver’s stance, arguing that: “If we invest in expanding fossil fuel production, we risk locking ourselves into a high-carbon pathway that increases greenhouse gas emissions for years and decades to come.”

The group added that if Canada wants to avoid dangerous climate change it “will require significantly reducing our reliance on fossil fuels and making a transition to cleaner energy.”

Meanwhile, some 36 Norwegian organizations have sent an open letter to their Prime Minister  expressing opposition to development of the tar sands by Statoil, which is in part owned by the Norwegian State.

Finally, a group of 150 influential Democrat donors also agree with the Canadian scientists. They sent President Barack Obama a letter of their own on Friday, urging him to reject Keystone XL because they said it would delay the transition away from fossil fuels.

“We urge you to proclaim with clarity and purpose that our nation will transition away from carbon-based fossil fuels to job creating clean energy,” the letter said. “As challenging as this may be, the costs pale in comparison to the human consequences of unchecked climate disruption.”