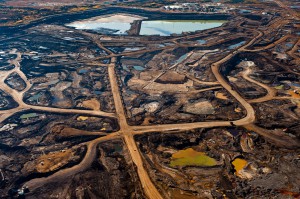 For the last three years, Canadian and Albertan politicians have toured the great cities of America and Europe, with one mission.

To persuade the world that we could exploit the tar sands in an “environmentally responsible” way.

To many people, the concept of strip mining Alberta, and exploiting this dirty carbon-intensive fuel and then trying to greenwash it as green, is a disgraceful misnomer that has to challenged at every level.

But as they have toured the capitals, the Canadian politicians have argued that they are making progress in reducing the tar sands toxic legacy. Albertan Premier, Alison Redford, has argued that Albertans would have “world class environmental stewardship” of the tar sands. They can have their carbon cake and eat it responsibly, they say.

But, as so often in the past, Redford and her fellow Canadian politicians have been playing fast and loose with the truth. Enter the respected Pembina Institute, one of Canada’s leading environmental watchdog organisations.

They have just released an update on the progress of some 19 recommendations they made two years ago on how there could be “responsible” tar sands development.  They have found that “very little progress has been made on the recommended policy improvements”.

The Canadian press is non-plussed: “Tailings ponds are expanding, greenhouse gas emissions are set to double by 2020, and there is a seven-year delay in a promise to restrict water use from the Athabasca River at key low-flow times,” reports the Edmonton Journal.

The Pembina Institute argues there was a need to monitor the impact on biodiversity.  Well, the Joint Canada-Alberta Implementation Plan for Oil Sands Monitoring was announced in 2012.

There have been problems with the monitoring plan from the start. Back in February we pointed out that the “Canadian press is reporting that nearly a year after the Albertan and Federal government unveiled a three-year plan to increase the monitoring of the tar sands, there are still no formal public results.”

Indeed the plan still is far off from being perfect: “Independent governance free from industry and government influence, plus a long-term and sustainable funding model, are the final key pieces that will determine the success of the plan,” says Pembina. So I would argue the jury is still out on that.

So the real one partial success could be the fact that the new Lower Athabasca Regional Plan, or LARP, which was released in August 2012, has increased the percentage of the land in the area that is protected from industrial activity to over 20% of the region. But Pembina was originally asking for 50 per cent and the land has not been legally protected.

Well that was the good news.

And on greenhouse gas emissions (GHG) the report is damning: “The Government of Alberta has acknowledged that it is not on track to meet its target to reduce annual GHG emissions by 50 MT below business as usual by 2020. Since Alberta’s GHG management plan is designed to support an increase in GHG emissions, it is not consistent with Canada’s target to reduce emissions 17% below 2005 levels by 2020.”

All in all it’s not looking good. Simon Dyer, policy director at the Pembina Institute, argues that Redford’s recent greenwashing speeches to Washington audiences “ring hollow” given this lack of progress.

He argues “The Government of Alberta needs to move urgently to deliver on its overdue commitments” and finally implement the recommendations outlined in the report.