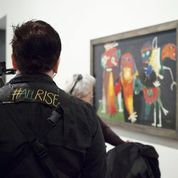 Both BP and Shell’s cynical “reputation-cleansing” via sponsorship has once again been challenged by activists.

Yesterday, to mark the 3rd Anniversary of the Deepwater Horizon, the art activist group, Liberate Tate, once again challenged BP’s on-going sponsorship of one of London’s most prestigious cultural institutions, the Tate Modern.

BP has sponsored the Tate for over 23 years, with a series of controversial sponsorship deals. It is the Tate’s longest-serving and most loyal sponsor. But many activists contend that this sponsorship helps BP cleanse its environmental record, especially devastating events such as its Deepwater spill.

So yesterday, Liberate Tate started what will be a week long performance entitled ‘All Rise’ that dramatically brings the ongoing Deepwater trial, currently occurring in New Orleans, into Tate Modern.

Yesterday afternoon three performers using specially constructed cameras filmed themselves wandering about various parts of Tate Modern, live-streaming their actions as they whispered selected transcripts of the courtroom proceedings from the BP trial.

Paul Brady, who was one of the three performers said: “It’s not only BP that’s on trial for the devastation it has caused to Gulf Coast communities and ecosystems, it’s also Tate and other cultural institutions that provide BP with the social legitimacy to continue operating with such destructive consequences”.

He added: “We’re making a performance that brings the BP trial into Tate Modern because BP’s arts sponsorship cannot be separated from the irrevocable damage it does to communities and the climate.”

BP is not the only company targeted by activists. Yesterday evening, a group of about 10 singers and musicians who called themselves ‘Shell Out Sounds’ (SOS) returned to another iconic London cultural institution, the Southbank Centre, to give a musical intervention during the interval of a Shell-sponsored performance by Imogen Cooper and the Budapest Festival Orchestra.  The oil giant has sponsored the Classic International series of concerts at the Southbank Centre since 2007.

The ‘flashmob’ were dressed in black with purple sashes and accompanied  by a group of string players who gave a rich accompaniment to  their ‘The Riddle of the Niger Delta’, written specifically for the concert, setting the poignant words of the Nigerian environmental and human rights activist, Ken Saro-Wiwa to music.

Saro-Wiwa was murdered in 1995 by the military junta in the country due to his campaign against Shell. Countless other Ogoni from the region were murdered, raped and tortured.

The group then handed out flyers about Shell’s appalling human rights record in the Delta. “Shell’s sponsorship of the Southbank Centre makes them appear generous, responsible and an essential part of our cultural institutions”, said Chris Garrard, who sang in the performance. “This is simply not the case.”

Garrard pointed out that while total sponsorship to the Southbank in 2009 was around £2.61 million, Shell gave roughly seventeen times that amount, approximately £44 million, to government security forces in Nigeria in the same year. “Once audience members know these facts” he continued, “they will join us in asking for the relationship with Shell to end.”

The protest seems to have had a positive reaction: The audience applauded at the end, the Southbank Centre said the performers could perform whenever they liked, and were willing to talk about Shell’s sponsorship.

If anyone wants to watch more of the BP protests they are being streamed this week daily at 3-4pm UK time (2-3 GMT) at www.all-rise.org