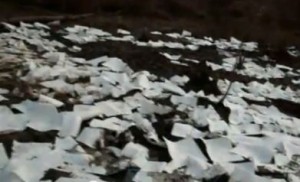 When news emerged last week that Exxon had surprisingly secured a no-fly zone over the area surrounding its 150,000 gallon spill in Mayflower in Arkansas, most people thought that here was Big Oil up to its tricks again trying to deliberately stop the public and press from seeing the extent of the destruction from the spill.

So activists from Keystone XL Blockade decided they should go and investigate.  They heard rumours that Exxon was deliberately pumping oil into wetlands to keep it from public view. But when they tried to get to the affected area, they were turned away several times by police and Exxon spill cleanup workers.

But on Saturday they sneaked back to the oily wetlands. What we already knew is that the spill has already killed ducks and other wildlife, which have been found by cleanup workers.

But the footage taken by activists at the weekend says it all. It seems that Exxon has been dumping oil from its Mayflower spill in a wetlands area after all.

And no wonder they have been trying to keep the public away.  The footage (see picture) shows white paper towels scattered over the oil as some unbelievably pathetic attempt to clean up the oil. This is not some banana republic this is America’s backyard and yet the world’s largest and most powerful oil company is using paper towels to clean up a spill and then just leave them there.

If this is the 21st Century cutting edge clean up technology, it’s a complete joke. And it makes you wonder what they would do if there was a spill from the KXL.

Tar Sands Blockade has also been interviewing local residents. One said that the quality of the air is not good. He complained that his eyes were constantly watering, his sinuses were affected. And because of the pollution he could no longer fish in the local lake. Exxon acts “like nothing is wrong”, he said. “They act like it was no big deal”. The local resident accused Exxon of “Bullshit propaganda” over the spill .

Sherry Appleman, who has lived on the shores of Lake Conway for 12 years, recalls what happened on the day of the spill. She originally heard about the spill on Facebook. “They keep telling us different stories about what kind of oil spilled here. I don’t think the public actually knows what the public spilled here.” She too complained that “here throat is burning all the time” and that her sinuses were affected. “My throat is on fire all the time”.

Another resident said they first heard about the spill when a “terrible smell hit us”.

Will Exxon pay for its mess? Because the crude oil product is labelled dilbit or “diluted bitumen,” rather than “oil”, a legal loophole allows Exxon to escape without paying into a fund for cleaning up oil.

However, two Arkansas residents have now filed a class action lawsuit against Exxon Mobil, demanding over $5million in compensation.

Hopefully the court will be shown images of Exxon’s incompetent paper towel clean up technique.