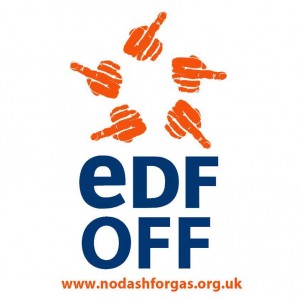 Just under 60,000 people have now signed a petition that demands that the French energy company EDF drop a sinister lawsuit against 21 climate change activists who occupied one of its power plants last year.

It was back in October last year that the activists spent a week up a chimney at EDF’s power station in Nottinghamshire in the UK, highlighting the hypocrisy of Britain’s continuing reliance on fossil fuels, typified by a new generation of gas power plants.

Last month, the activists pleaded guilty to aggravated trespass and now await sentencing. But now EDF has taken out a separate civil lawsuit against them for a staggering £5 million. The move has caused outrage.

Yesterday, two of those protesters appeared on BBC1’s The Big Question show to debate the question “should activists be sued”? “Was it scary?” Ewa Jasiewicz, one of the protesters was asked by the presenter: “Climate change is scarier,” she replied. “Fuel poverty is scarier.”

Another of the activists Danni Paffard then spoke passionately about the lawsuit against them, saying “I think the civil case is awful. I think it is completely wrong that this multinational should be suing protesters. “

Asked what could happen if they lose,  she replied “We lose our houses, we lose our change to ever get a house, we lose our savings, we pay a portion of our salary to a big company for the rest of our lives.”

The £5 million would “destroy” the protesters, she said, pointing out in contrast that it was only half a days profits for the company.

SLAPP is the right word her. Last week, Guardian columnist George Monbiot was right to point out that EDF’s legal action is not about money – it is a Strategic Lawsuit Against Public Participation – or SLAPP.

Nearly twenty years ago I wrote a book called Green Backlash, which looked at the backlash against environmental activists, including legal intimidation like EDF’s action. I wrote “just as violence is designed to chill people into silence through physical intimidation, so SLAPPs are meant to chill through legal intimidation.”

But, with intimidation comes risks. EDF is rapidly becoming seen as the bully boy of the energy market, which is causing its own intense backlash.

Monbiot argued that EDF has “made the biggest strategic mistake since McDonald’s pursued two impoverished activists – and inflicted more damage on its brand than its critics had ever managed.”

Ben Stewart from Greenpeace said yesterday that EDF was suffering from a “reputational collapse.”

He is not alone in thinking that EDF’s reputation is being shredded. Brendan May, founder of the corporate consultancy Robertsbridge, argues that the lawsuit is “reputational Armageddon and suicide” for EDF.  EDF was even now trumping Shell  as his ‘PR idiot’ firm of the year.”

May wrote: “It will take EDF a generation to recover from its idiocy if the firm persists with this unprecedented civil claim against the individual protesters. EDF will be the poster child for all that is wrong, not just with energy policy, but with big business. Those of us who work with very large companies day in day out, must speak out.”

We must all speak out. Yesterday Naomi Klein posted on Youtube a video in support: “Our Governments have been negotiating about the climate crisis for 23 years. In that time, global emissions have soared by 54%. Clearly the official, respectable, legal means for dealing with this crisis aren’t working. What used to be radical is now rational.”

Customers are said to be leaving the company in droves. As I said, just under 60,000 people have signed a petition set up by the parents of another protester, Claire Fauset.

The petition reads:  Claire “lobbied the government, emailed companies, signed petitions and marched with placards, but nothing changed. So Claire and her friends decided they needed to take more decisive action to get the government and energy companies to change their ways.”

Her parents argue that it “is totally unfair” that EDF are suing their daughter. “It’s heartbreaking to think that Claire and her friends are being punished for putting themselves at risk for the good of humanity,” they argue.

If you think its unfair speak out too. As a first step sign the petition. And then share it will your friends.

It is also now time for those in sports with sponsorship ties to EDF to stand up to the corporate bullying too and to sever all ties with the bully boys too.