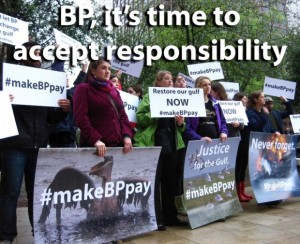 After months of delay, the trial of the century finally opened yesterday in New Orleans with 50 attorneys crammed into the small courtroom.

Outside rows of protesters had banners with “Restore the Gulf”, “#makeBPpay”, and “Never Forget”.

The headlines do not look pretty if you are BP.  We are used to the bankers being labelled as greedy, but not so often the oilmen. “Greed devastated the gulf,‘ says the Chicago Tribune. BP “put profits over safety” says the BBC.

Yesterday the prosecution began to outline the problems on BP’s Macondo’s well, or the “well from hell” as it was known, in the increasingly chaotic days before the disaster. The well was running late and £50 million behind budget. BP was under pressure to save money and costs and so showed a “reckless disregard for safety”.

The person in charge of BP’s doomed Deepwater Horizon rig, John Guide, had warned his boss that staff were operating in “chaos, paranoia and insanity” just days before the fatal blowout.  Just four days before the explosion Guide sent an email to his manager saying his team were “flying by the seat of our pants”.

The men “were at wits’ end” and there was a “huge level of paranoia that was riding chaos”. They  were trying to “trying to make sense of all the insanity”.

But the warnings were ignored. What did BP do in the face of a risky well? “They did nothing,” alleged the prosecution.

“BP was blinded by greed,” said Luther Strange, Alabama’s attorney general, who is set to be one of the central characters in the court case. “To BP, money mattered most. Greed devastated the gulf.”

BP officials encouraged a “culture of entrepreneurial risk-taking,” he said.

Mike Underhill representing the Department of Justice said the disaster resulted from BP’s “culture of corporate recklessness” charted in Houston and London. “Despite BP’s attempts to shift the blame to other parties,” Mr Underhill said, “by far the primary fault for this disaster belongs to BP”.

Underhill added that “A safety corner cut a day saved was a $1m saved for BP”.

“The tragedy of this case,” continued Underhill, is that it was caused by failures that “didn’t even amount to pocket change”. He said that BP knew it was in difficulties and that tragedy could have been averted with “as little as a 10-second phone call” or “a 30-second walk down to the tool pusher”.

There was no respite from other quarters, either.  Jim Roy, an attorney representing the plaintiffs’ steering committee said that future testimony would illustrate “gross and extreme departure from the standards of good oilfield practice.” Roy said BP had put, “production over protection, profits over safety”.

Roy said that “The evidence will prove that the Deepwater Horizon was unseaworthy as of April 20 2010 and had been for many months before and that BP and Transocean knew it.”

Even the emergency claxon was disconnected, in case it would wake the crew.

BP was not alone in being roasted: Roy also criticised the rig’s operator, Transocean, lambasting the company’s safety official: “His training consisted of a three-day course. Amazingly, he had never been aboard the Deepwater Horizon.”

Halliburton provided BP with cementing of the Macondo well that was “poorly designed, not properly tested and was unstable”.

BP was even attacked by its fellow defendants. Transocean attorney Brad Brian said the dead rig workers “put too much trust in BP and paid for that trust with their lives.”

Even though the trial has started, many people still believe that a settlement will happen before judgement day.

“BP is in a very tight bind. I never thought that they intended to try this case and really cannot afford to do so because the exposure is too potentially catastrophic,” said Blaine LeCesne, a professor at Loyola University College of Law in New Orleans.

Given the headlines after day one, he is right.