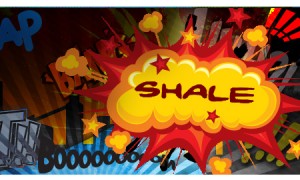 Is the fracking boom set to go spectacularly bust?

Those great folks at DeSmogBlog have highlighted how two reports were published yesterday, which stick a huge pin in the hype surrounding the shale gas bubble.

Rather than putting us on the road to energy security, the reports basically argue that the fracking boom could burst just as the US housing market imploded in the late noughties.

The aim of the website is to provide critical analysis — using industry and government data — to counter the false claims that domestic supplies of shale gas and shale oil (tight oil) will ensure energy security and significant long-term economic benefits to the US.

In the first report J. David Hughes from the Post Carbon Institute has written a painstakingly researched report, called “Drill Baby, Drill”, which looks at the prospects for various unconventional fuels to provide energy abundance for the United States in the 21st Century.

It will make uncomfortable reading for politicians and the pro-oil hawks. The report concludes that the U.S. cannot drill and frack its way to energy independence. “Despite the rhetoric, the United States is highly unlikely to become energy independent unless rates of energy consumption are radically reduced.”

Indeed the “much-heralded reduction of oil imports in the past few years has in fact been just as much a story of reduced consumption, primarily related to the Great Recession, as it has been a story of increased production.”

The report argues that “At best, shale gas, tight oil, tar sands, and other unconventional resources provide a temporary reprieve from having to deal with the real problems: fossil fuels are finite, and production of new fossil fuel resources tends to be increasingly expensive and environmentally damaging.”

Shale gas is ridiculously expensive: some $42 billion per year is spent to drill more than 7,000 wells, just in order to maintain production.

Tight oil, meanwhile does not fare much better and is a bubble of “ten years duration”. Once again, tight oil plays “are characterized by high decline rates, and it is estimated that more than 6,000 wells (at a cost of $35 billion annually) are required to maintain production”.

Hughes concludes that “the projections by pundits and some government agencies that these technologies can provide endless growth heralding a new era of ‘energy independence,’ in which the U.S. will become a substantial net exporter of energy, are entirely unwarranted based on the fundamentals.”

The second report is written by a former Wall Street financier, Deborah Rogers, who examines the role of the banks in the shale gas bubble.

She argues that “Wall Street promoted the shale gas drilling frenzy, which resulted in prices lower than the cost of production and thereby profited [enormously] from mergers & acquisitions and other transactional fees.”

Such has been the frenzy that U.S. shale gas and shale oil reserves have been overestimated by a minimum of 100% and by as much as a massive 400-500% by operators. The reality is that “Shale oil wells are following the same steep decline rates and poor recovery efficiency observed in shale gas wells.”

The reason that the price of natural gas has been driven down is largely due to severe overproduction in meeting financial analysts’ targets of production growth for share appreciation.

She concludes that “Unconventional oil and gas from shales has been claimed to be a game changer, revolutionary,“a gift and national treasure,” however “shale development is not about long-term economic promise for a region, nor is it about job creation or long term financial viability of shale wells”, its all about a quick financial win for the bankers.

“Leases were bundled and flipped on unproved shale fields in much the same way as mortgage-backed securities had been bundled and sold on questionable underlying mortgage assets prior to the economic downturn of 2007,” she warns.

Just as the banks went boom to bust, these reports are a stark warning about what could happen with the fracking boom.