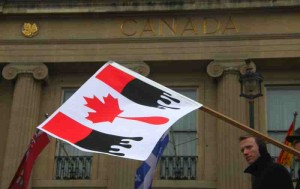 In his State of the Union address President Obama issued a challenge to Congress to act on climate change.

“The fact is, the 12 hottest years on record have all come in the last 15,” he said. “Heat waves, droughts, wildfires, and floods — all are now more frequent and intense. We can choose to believe that Superstorm Sandy, and the most severe drought in decades, and the worst wildfires some states have ever seen were all just a freak coincidence. Or we can choose to believe in the overwhelming judgement of science — and act before it’s too late.”

But there was an inherent contradiction in his speech arguing that, whilst tackling climate change, his Administration was going to encourage oil and gas expansion as part of his “all-of-the-above” energy plan.

One of the biggest lobbyists pushing for opening up new oil and gas leases is, of course, the good old boys at the American Petroleum Institute. They are also of course lobbying hard on the KXL pipeline.

And later today you can expect more smoke and mirrors and cooked up statistics when API’s Jack Gerard discusses with reporters “the benefits of KXL and how supporters of the pipeline will be ramping up efforts to get this project approved.”

Part of this PR push will be an advertising blitz and a supposed mobilisation of the grassroots. The trouble is with the API is that you never know if there grassroots are real or whether it is just another fake astroturf PR campaign.

The real grassroots action will happen against the pipeline at the weekend, when thousands of people gather to oppose the pipeline in Washington, in what promises to be the largest ever rally on climate change.

As Kevin Grandia writes in the Vancouver Observer: It isn’t the Keystone XL “pipeline itself that is at the heart of the matter though. It is the 500,00 barrels of Canadian tar sand oil that will be pumped through the pipe that has so many Americans upset. And it should upset Canadians too.”

It should hurt Canadians for many reasons – not just the fact that the KXL pipeline, if built, will export Canada’s dirty energy to the US, Europe or even Asia.

But what we know is that the anti-tar sands campaign has the Canadian and Albertan governments really worried. As I said on Monday, I have been working with Friends of the Earth Europe on Canadian lobbying of the tar sands in Europe.

One document uncovered in this research should worry all Canadians. An extract of an email readout of a meeting between Gordon Campbell, the Canadian High Commissioner and Tony Kay the British Consul-General in Calgary reveals that the tar sands had become a “totemic issue, hitting directly on Brand Canada”.

The Canadians have even tried to get senior British Ministers to “change the language away from negative focus on oil sands” to a more positive one about “Canadian energy production” and how Canada is an “energy superpower with a large % of renewables”.

They can try and spin it all they want. The truth is Canada’s blinkered, belligerent, even brutal, exploitation of the tar sands is hurting its image abroad. Its once clean image of a caring nation is no more.

As Kevin Grandia points out, this week-end’s march is not only about the KXL and climate change.

“It’s about Canada and the national identity we will be moving forward with. Will we continue on our current path to becoming the world’s newest, and possibly last, petro-state — the country that ushers in a “new normal” of extreme weather that we’ve only seen in the movies?  Or, will we rebuild our Canada back into the country of international diplomacy and environmental action?”

So far the Canadian diplomats have tried to bully their way on the international stage to try and get countries to take the tar sands. Do they speak for true Canadians? If you care about Canada’s future, then you should support the march on Sunday. Its that simple.