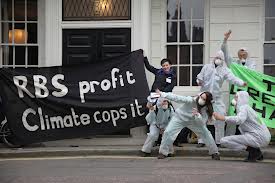 Last week RBS chairman Philip Hampton took part in a live Q&A session with the Guardian newspaper in response to the Libor-rigging scandal.

One of the questions that was put to Hampton by a reader was: “How do you continue to justify continued your role in financing the Canadian tar sands, arguably a greater crime than the Libor scandal?”

To which Hampton replied: “@benj67 – We haven’t lent money to tar sands projects for at least four years. By the same token we stopped all association with businesses that make cluster bombs. We take these environmental and sustainability concerns extremely seriously. We do of course have extensive business dealings with major oil companies such as BP and Shell, and have done for many decades.”

RBS have stopped financing the tar sands? Surely that’s a reason for a big woohoo! and a round of backslapping for all the many people that have protested and campaigned and put pressure on RBS over their fossil fuel finance and in particular tar sands?

Unfortunately, Hampton is being selective with the truth.There’s difference in banking between project finance and corporate finance. Project finance is a loan that is specifically tied up to the construction or development of a particular project or piece of infrastructure – in the context of fossil fuel finance, this could be a pipeline or a refinery. Corporate finance is a loan that is simply made to a particular company that is money that isn’t tied to any particular purpose.

So Hampton is choosing his words very carefully in his Guardian response in alluding only to project finance.  It could well be true that RBS hasn’t been involved in any project finance of tar sands in the last four years, but they’ve definitely been involved in providing an awful lot of finance to the companies that are engaged in it.

Platform’s 2010 report Cashing in on Tar Sands: RBS, UK banks and Canada’s “blood oil” showed that in a three year tie period between 2007 and 2009, had led underwriting in loans to companies operating in the tar sands to the tune of more than $7.5 billion. (page 52 of the report).

At the 2012 RBS AGM it was revealed that RBS had underwritten bonds worth $131.25 million for controversial tar sands pipeline company Enbridge Energy in the previous year. So RBS might not have funded tar sands directly as an activity itself, but it is certainly financing the companies, and it is that finance that enables those companies to accelerate or extend their tar sands mining.

What is interesting in Hampton’s response is an implicit admission that tar sands are definitely ‘a bad thing’ for RBS to be associated with.

He goes as far as to mention tar sands in the same breath as cluster munitions, which is a telling insight into how much he equates (or at the very least recognizes the public perception) tar sands as a destructive social bad. This in itself is a big victory for all the account holders, students, activists and Canadian First Nation allies that have put pressure on RBS over its tar sands finance. They ‘get it’.

But it’s not enough for high-ranking bank executives to admit to the horrific nature of tar sands finance, there needs to be energy sector finance policies that reflect this too. The French bank Crédit Agricole recently published energy sector policies that excluded tar sands project finance.

If, as Hampton say, RBS hasn’t provided project finance for tar sands for the last four years, and if it’s Chairman sees a controversy-equivalence between them and cluster munitions, then surely it would be a low-hanging fruit of good will to the public that has continuously called the bank out on the issue to publish some sort of policy that makes this decision explicit.

This was one of the demands that we and 9 other organisations made in a letter to Philip Hampton and the RBS board sent in June 2011 and then updated in May 2012 (you can download the pdf of the May 12 letter).

We asked for policies that kept up with ‘best practice’ in the sector, reflecting that a number of other banks had taken the initiative in explicitly identifying tar sands as a particularly problematic area of fossil fuel finance.

We also identified the need for RBS to address its corporate finance as well as its project finance, arguing that: “All current and intended operations of a company must be taken into account during any financing deal; RBS cannot commit to fairer more sustainable practices on one hand whilst turning a blind eye to harmful practices supported with the other. Robust and suitably specific policies must be in place to prevent RBS Group from providing finance to operations which would fall outside of any limitations set for project finance, whether the financing is corporate, equity, bonds or otherwise.”

Importantly, the letter foregrounded the issue of Free Prior and Informed Consent of Indigenous Peoples to the activities carried out by the companies RBS were financing. Canadian First Nation representatives have repeatedly attended RBS AGMs to bear witness to the devastation being carried out to their homelands and traditional ways of life through tar sands extraction.

But RBS executives continue to look the other way and conveniently absolve themselves through their differentiation of corporate finance and project finance.

Unfortunately, almost a year later, we haven’t received a response to the letter that was signed by ten different civil society groups on May 2012, which leads one to conclude that RBS are too busy fixing the Libor rates to show any  real commitment to making their banking practices more sustainable.