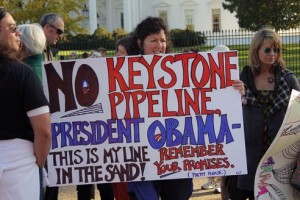 Last Friday, when John Kerry began his new job as secretary of State Friday, sitting rather uncomfortably on the top of his in-tray is whether to approve the controversial KXL pipeline.

Kerry conceded as much at his Senate confirmation hearing last week: “It will not be long before that comes across my desk”, Kerry said: “And at that time, I’ll make the appropriate judgments about it.”

The “appropriate judgement” would just to say no, denying the dirty tar sands a route not only to America but also to Europe.

Many people hope that John Kerry, who has been described as a self-described “passionate advocate” for tackling climate change, will stand up to the intense Canadian and oil industry lobbying surrounding the issue.

Sierra Club Executive Director Michael Brune said last week that “We are excited that he will bring his strong credentials on climate to the critical decisions facing our planet”.

Last month, Brune announced that the Club would, for the first time in its long and illustrious history, be prepared to participate in acts of civil disobedience against the pipeline, which he calls a “climate disaster.”

Brune argues that “We simply can’t transport 700,000-800,000 barrels of oil [a day] from one of the dirtiest, most carbon-intensive oil sources on the planet and say that we’re sincere in our commitment to fight climate change. You can’t cut carbon pollution and expand production of a carbon-intensive fuel source.”

The fact that the Sierra Club is prepared to undertake civil disobedience shows just show strong the feeling is right now against the pipeline, which has reached iconic status for many, even before being built.

This was noted by Daniel Yergin, the author of the Prize and chairman of IHS Cambridge Energy Research Associates, last week.  He said that KXL “is probably the most famous pipeline in the history of the world, and it hasn’t even been built yet. It is a symbol around which the opponents of hydrocarbon have rallied.”

Reuters last week noted that the odds had shifted against the pipeline being built, but the reality is that no one knows for sure.

What is likely to happen is that there is some political trade-off: if Obama approves KXL he will go hard on emission standards for power plants or vice versa.

Supporters of the kind of approach continue to come from some surprising quarters. Even Nature argued recently that the President should approve the KXL as long as environmental standards were upheld: “The administration should face down critics of the project, ensure that environmental standards are met and then approve it”, wrote an editorial in the prestigious scientific journal. “By approving Keystone, Obama can bolster his credibility within industry and among conservatives,” it said.

But at the end of the day, it is not an either / or decision. It should not be about a trade off between the pipeline and emission standards. We need both. Bold leadership on climate by Obama and Kerry means both saying no to KXL and tightened emission standards for power stations.

Some wire reports are now saying that there may not be a decision on KXL until June at the earliest, with the decision  months not weeks away.

During the next few months, there will be intense lobbying by Canadian politicians and officials until then.

The bottom line is that Obama and Kerry are the most progressive politicians on climate to have reached President and Secretary of State. They must seize the political initiative and show true leadership on the issue.

And that means no trade-offs. No either/ ors. No if or buts. It’s a No for KXL. And tough laws for power stations as well. Nothing else will do.