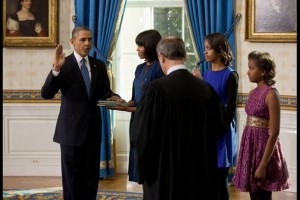 Yesterday Barack Obama was officially sworn in for his second term as US president in a small ceremony at the White House, which has to happen on the 20 January.

Today there is the official ceremony in Washington with all its pomp and tradition, with tens of thousands expected to join in the celebrations.

The President’s in-tray is already overflowing, cluttered and pressing, whether it is internationally such as the pull-out of troops from Afghanistan to terrorism in North Africa, or the threat of a nuclear Iran.

Nationally, it is not much better, with thorny issues of immigration and gun control, not to mention the small issue of dealing with the country’s burgeoning debt crisis.

And then of course there is the elephant that stalks the White House: climate change and the Keystone XL pipeline, the delivery device for the dirty tar sands.

Often Obama talks tough about climate but then does not act accordingly. We need to make sure that this time he does take decisive action and hold him to his promises.

Let us not forget that on the eve of his election for a second term, Obama said he wanted America’s children to grow up in a world “that isn’t threatened by the destructive power of a warming planet.”  Obama has now said that climate change is one of his top three second-term priorities.

Many people will be waiting to see if later today Obama priorities climate or the controversial KXL pipeline in his speech.

There are many decisions the President will take that will have to be a compromise between the Democrats and the Republicans. But there cannot be any compromise on KXL. You either build the pipeline or you don’t. There is no middle way. Its either a yes or a no.

If Obama is to have any credibility left on climate, he must stop the pipeline. Its really that simple. He cannot talk tough on climate and allow the pipeline to happen. Last week, Oil Change International added to the already overwhelming evidence as to why the pipeline should be stopped.

Last week’s report, Petroleum Coke: the Coal Hiding in the Tar Sands, revealed that there is 24 per cent more CO2 embedded in a barrel of tar sands bitumen than in a barrel of light oil. Moreover because of the hidden petcoke in the tar sands, the KXL will emit 13% more CO2 than the U.S. State Department has previously considered.

Also don’t forget the mounting physical evidence outside your windows: whether it be record droughts in the Midwest, 2012 being America’s warmest year ever, or Hurricane Sandy slamming into New York.

And yet worse is to come. A recent US government report concluded that temperatures might increase by 5-10 degrees by 2100, if we do not act. The trouble is the scientists are warning that the time to act is fast running out. Obama may have four more years, but we don’t. The planet doesn’t. Big and bold decisions have to be taken now.

The American public supports action too. Three-quarters of independents, 93 percent of Democrats and 52 percent of Republicans believe climate change should be at least a priority for the president and Congress.

Many environmentalists are expecting Obama to at least signal some kind of action on climate in his speech. Earlier this month, they jointly sent the President a letter, calling for action.  As well as calling on the President to “raise his voice” on the issue, to “use his executive authority” to demand clean power from existing and new power stations, they also demanded he rejected “dirty fuels”. And that of course means the tar sands and KXL.

They wrote that “We should not pursue dirty fuels like tar sands when climate science tells us that 80 percent of existing fossil fuel reserves need to be kept in the ground.”

One of those to sign the letter was Sierra Club Executive Director Michael Brune, who  argues that  “It would be a huge missed opportunity if the president did not highlight the work we must do to address climate disruption.”

It will be more of a wasted opportunity. It could signal a wasted four more years. And that is something we cannot afford.