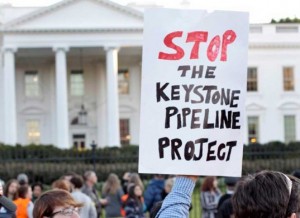 Tomorrow at the National Press Club in Washington, academics and activists will present damning new research about the Keystone XL pipeline and the development of tar sands.

The event coincides with a massive day of action against the KXL and tar sands in Washington on the President’s Day weekend. Rally information is here.

The research will provide further compelling evidence as to why the Obama Administration should reject the pipeline.

The new research will be in part presented by Lorne Stockman from Oil Change International, the author of OCI’s explosive new report, Petroleum Coke: the coal hiding in the tar sands.

The experts will explain that moving ahead with the pipeline would not only cause reckless expansion of the tar sands industry, but also will cause significantly more carbon emissions than anyone has reported.

Over the coming months, President Obama has to decide whether to approve KXL, which experts argue will increase global climate pollution and send the wrong signals about the United States’ commitment to fighting climate change.

This is especially true in the wake of the new U.S. National Climate Assessment that reported extreme weather events are increasingly having wide-ranging impacts in every region of the country, and the government’s recent declaration that 2012 was the hottest year on record in North America.

They wrote “You take office for the second time at a critical moment. As you may know, the U.S. has just recorded the hottest year in its history, beating the old mark by a full degree; the same year that saw the deep Midwest drought, and the fury of Hurricane Sandy, also witnessed the rapid and unprecedented melt of the Arctic ice pack.”

The letter continued: “Eighteen months ago some of us wrote you about the proposed Keystone XL tar sands pipeline, explaining why in our opinion its construction ran counter to both national and planetary interests. Nothing that has happened since has changed that evaluation; indeed, the year of review that you asked for on the project made it clear exactly how pressing the climate issue really is.”

The scientists finished by saying: “We hope, as scientists, that you will demonstrate the seriousness of your climate convictions by refusing to permit Keystone XL; to do otherwise would be to undermine your legacy.”