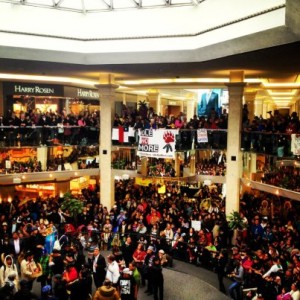 There are increasing calls in Canada for the inspirational indigenous leader, Attawapiskat Chief Theresa Spence to end her hunger strike which is entering its 38th day.

Spence has always said that she would end her hunger strike, where she is only taking water, tea and fish broth, after she had met Prime Minister Stephen Harper.

Although Spence met Canada’s Governor-General David Johnston on Friday, she has said she will continue her hunger strike until she meets both Johnston and Harper together.

On the surface, at least, Harper has promised some token political action, with a new focus on talks on treaty relationships and comprehensive claims. First Nations National Chief Shawn Atleo, one of the leaders who did actually meet with Harper, said that “We have achieved some movement today.”

Some movement, but no where near enough. The Idle No More movement is now gearing up to put further pressure on the government, by planning a national day of action on 16 January. One of its targets will be the tar sands.

Idle No More leaders are now vowing to shut down Alberta’s only major highway to the dirty tar sands. “I can promise you, Highway 63 to the oilsands plants will be shut down if things don’t change for the better,” Chief Allan Adam, head of the Athabasca Chipewyan First Nation, told a rally in Edmonton on Friday.

“I can’t speak about plans being made, but I guarantee you talks are being had behind closed doors.”

He added: “The protest will last through the summer and the blockade of Highway 63 is going to happen if things don’t change. If he’s going to stonewall the first nations people, we can stonewall the highways too.”

Adam also said that many people in the tar sands region are tired of what he calls the Harper government’s unending push to weaken the country’s environmental laws, and the impact the tar sands are having on the health of indigenous communities.

Writing last week in the Huffington Post: Bill McKibben noted that the Idle No More movement and Canada’s indigenous community “are, legally and morally, all that stand in the way of Canada’s total exploitation of its vast energy and mineral resources, including the tar sands”. He added: “The stakes couldn’t be higher, for Canada and for the world.”

I could not agree with you more, Bill. The Idle No More movement is an inspiration to us all.