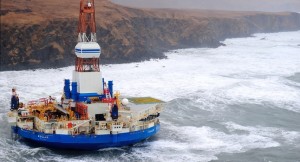 After nearly a week of being stranded, a line has finally been attached to Shell’s grounded oil rig, the Kulluk, in Alaska.

It means that the rig will now be towed from its current position in Ocean Bay some 30 miles north to safer waters.

Ironically for a company that has ploughed nearly $5 billion into its Arctic campaign, it seems the rig was being moved to avoid a tax levied on oil and gas equipment in the state.

If this is the case, Shell might have saved itself a few short-term bucks, but lost itself billions in the long term. Because this disaster just might be the final straw for regulators and politicians.

The latest disaster is just one more in a long list for Shell in its Arctic debacle. It gives further fuel to the fire for those who argue that oil drilling in the region should be banned.

And those calls are now not just coming from traditional quarters. Eyebrows are being raised from the business press too: The Financial Times notes that the incident has “raised new calls for the company to be prevented from resuming its Arctic exploration programme this summer.”

An article in Forbes magazine last week summed it up simply by saying “It would be a comedy of errors, if the stakes weren’t so high”.

Indeed, Democratic members of Congress in the House Sustainable Energy and Environment Coalition described it as the “latest in a series of alarming blunders.”

And the list of blunders and warnings is long (for a comprehensive list go here). To give you just a few examples: The week before the grounding, Noble Corporation, Shell’s drilling contractor, revealed that the US Coast Guard had concerns over “deficiencies and maintenance issues.”

Last month internal emails were released from the Interior Department which revealed that when Shell’s oil spill dome was accidentally dropped it “breached like a whale” and was “crushed like a beer can”.

Last Spring, the German bank WestLB announced that it would not provide financing to any offshore oil or gas drilling in Arctic, saying the “risks and costs are simply too high.”

The news came a week after insurance giant Lloyd’s of London issued a report concluding that offshore drilling in the Arctic would “constitute a unique and hard-to-manage risk.”

And nearly a year ago, an independent report by the Government Accountability Office concluded that Shell’s “dedicated capabilities do not completely mitigate some of the environmental and logistical risks associated with the remoteness and environment of the region.”

After reviewing all the evidence, Kiley Kroh and Michael Conathan from the Center for American Progress argue that: “Each of these mishaps, warnings and troubling revelations would individually be reason for pause. Taken together, they offer overwhelming evidence that the oil and gas industry is not prepared for the enormous challenge and incalculable risk of offshore drilling in the remote and volatile Arctic Ocean.”

Ironically the answer to the complex technical, logistical and environmental problems of Arctic drilling is really simple: just don’t drill there at all.