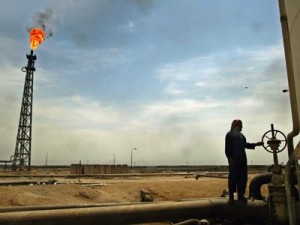 Is Iraq about to witness another war over oil?

The Washington Post is reporting that “Iraq’s two most explosive political conflicts — over land and oil — are primed to combust.”

And the trigger for a potential civil war is our old friends at Exxon, which is due to start drilling in the disputed territory between the semi-autonomous northern Kurdistan and the south, controlled by Baghdad.

When Exxon signed the deal to explore in the southern area of Kurdistan last year it was warned by the government in Baghdad that the considered the deal illegal, and that the company would “be committing a grave mistake”.

To complicate matters, Exxon has now plans to exit its stake in the $50 billion West Qurna oilfield in southern Iraq.

Tensions have been mounting since last month after clashes between forces from the north and south. The rhetoric is also being ratcheted up. “The prime minister has been clear: If Exxon lays a finger on this territory, they will face the Iraqi army,” Sami al-Askari, a member of parliament and confidant of Prime Minister Nouri al-Maliki told the Post. “We don’t want war, but we will go to war, for oil and for Iraqi sovereignty.”

The Post reports that the Iraqi army has said it will start hostilities if Exxon starts to drill in the disputed area. “If they do this, it’s a declaration of war,” one officer is quoted as saying.

There still may be time to diffuse the situation, with Exxon not due to start drilling until next summer, although surveying work will begin early in the New Year.

If the conflict does escalate, Baghdad believes that Kurdistan has more to lose from a civil war, because foreign companies are attracted by the region’s supposed excellent security, whereas those that invest in southern Iraq anticipate a risk of violence.

Exxon is not the only company causing concern with the government in Baghdad. The Financial Times reports that BP is seeking to change the terms of its contract with the Iraqi government for the vast Rumaila oilfield, seen as the jewel in the crown of Iraq’s oil industry.

Basically BP is struggling to deliver the goods. Under the contract it signed with Baghdad in 2009, the oil giant is obliged to increase production to 2.85m barrels a day. BP now wants to scale back that target to below 2m b/d.

The move reflects how difficult the challenges are for companies remain with a lack of infrastructure and bureaucratic problems still undermining operations.

Although production from the country generally is increasing with the country once again the second largest producer in Opec, many international companies could be looking to Kurdistan to drill, rather than in the south.

This will only increase tensions and add to the potential for conflict, which is the last thing this war-torn nation needs.