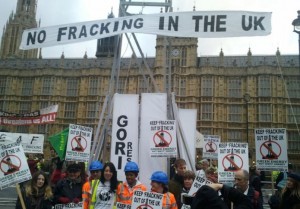 You can say many things about George Osborne, Britain’s Chancellor.

The opposition Labour party, backed by millions of unemployed workers, believe that his austerity programme is too far, too fast and too painful.

But most importantly, they argue, it is not working.

Osborne, in return, says he is not a man for turning and later today he is set to extend his austerity measures until 2018, long after the next general election.

This is despite the fact that so many people argue that his fiscal strategy is flawed.

It seems that George sticks to his guns once he has made his mind up, no matter how flawed his logic. And that includes Britain’s energy sector, with serious ramifications for its climate commitments.

Osborne has got his way on energy policy and promoting gas at the expense of renewables, even though, once again, many people argue his logic is deeply, deeply flawed.

As Guy Chazan, the respected energy journalist, wrote in the Financial Times yesterday, “gas goes to the heart of the dispute between Mr Osborne , the chancellor and Ed Davey, energy secretary, over energy policy – a dispute that has shaken the coalition.” Osborne has wanted gas and Davey renewable energy. But Osborne has won.

In today’s Autumn statement, Osborne is set to announce 30 new gas fired power stations, to produce 26 gigawatts of power, which could rise to some 37GW of new gas plants in the UK by 2030, accounting for half of the UK’s generation capacity.

This move has been not only been criticised by environmental campaigners but by the government’s own climate change advisor. The head of the Committee on Climate Change, the body that advises the government on global warming, has criticised Osborne’s gas strategy arguing it would jeopardise Britain’s carbon targets.

The gas-generation strategy includes “a scenario that reflects a new dash for gas,” says the advisor, David Kennedy. “This would not be sensible, or compatible with meeting carbon budgets and the 2050 target.”

To facilitate this “Dash for Gas” Osborne is expected to give the green light to widespread fracking across the UK and will consult on giving lucrative tax breaks to the fracking industry.  He also intends to set up an Office For Unconventional Gas to regulate what the government hopes will become a booming industry.

So Osborne has ignored the growing evidence from the US and Australia of fracking’s lethal legacy. He has continued the fossil fuel age for a generation.

So the UK looks set to frack, baby, frack no matter how many people think the policy is fundamentally flawed.