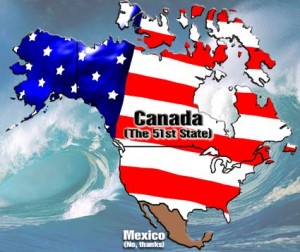 The United States of America has finally acquired the vast territory of Canada and its massive fossil fuel resources.

The acquisition appears to have been made via an episode of collective wishful thinking and misinformation, triggered by an optimistic report discussing American oil production issued by the International Energy Agency.

Okay, back to the real world.

The mass misreporting of the findings of the IEA’s World Energy Outlook 2012, published Monday, seems to be spreading like a virus. Key to the rose colored tint of many reports was the interpretation of North America as simply America.

Well sorry to disappoint but the report actually says the U.S. will still be importing nearly 3.5 million barrels of oil a day in 2035 despite increased production and reduced demand.

The misrepresentation of the IEA’s data was not confined to the usual suspects such as Fox News, but spread to publications that you would have thought would know better, such as Scientific American for example.

One outlet, the Daily News, got so excited that it preceded its headline with the phrase U.S.A.! U.S.A.! and failed to complete the sub-heading at all, so keen was it to spread this good news.

So here’s what the IEA report actually said.

It did say, and it has been widely reported, that the U.S. would become the world’s largest oil producer. Although most outlets neglected to point out that this leadership position, according to the IEA figures, will likely only pertain for a few years.

What it did say was that North America would become a net exporter of oil. That’s a big difference, because both Mexico and Canada are already net exporters of oil, and Canada will simply grow its production and exports of tar sands bitumen while keeping its demand steady.

That this was widely interpreted by the U.S. press as American oil independence not only exposes the tendency to take Canada’s natural resources for granted as America’s bounty but also demonstrates the grip this dangerous fantasy has  on the American psyche today. Not to mention the fact that it’s sloppy journalism.

The report did say that the U.S. will become a net exporter of energy. Again that’s a big difference because this is based on the U.S. exporting coal and gas while still importing around 3.5 million barrels of oil per day in 2035. The energy value of that coal and gas may be greater than the energy value of the imported oil, but that is not really an advantageous scenario if your transport system remains dependent on millions of barrels of oil per day and therefore, a volatile global oil market.

The figures in the report speak for themselves. See Table.

IEA WEO 2012 forecasts for U.S. oil production and demand against Saudi Arabian production.
Note: Not all policies are currently in place to achieve the U.S. demand reductions in this forecast.

As the IEA model’s figures (which some analysts question) show, U.S. oil production peaks around 2020 at 11.1 million barrels per day, when its consumption is still at 16.6 million b/d. This is a 5.5 million b/d difference.  By 2035, production tails off to 9.2 million b/d, but the production/demand gap is narrowed by a fairly dramatic reduction in demand.

And here’s the bit that just about everyone seems to ignore. The gap between America’s production and demand is narrowed far more by demand reduction than it is by production increases.

The wishful thinking, misreporting and general avoidance of the demand issue is a major challenge to coherent energy policy making in America today. A lot of the media, those in power, and the industry desperately want the American public to believe that everything will be all right if we keep on drilling and keep on shopping.

Although the nuances in the IEA report required some careful reading, it is irresponsible and dangerous to misread the report so blatantly, and in many cases the misreporting serves a clear agenda.

We need to wake up to the realities of America’s ongoing energy and climate crisis and stop pretending that everything is going to be fine just because this country and its neighbors have lots of fossil fuel reserves.

The reality is that only by reducing the demand for fossil fuels can America address both its economic vulnerability to volatile oil markets and address climate change, which is already hitting the global economy hard today.

The IEA report points out that we must leave at least two thirds of the world’s proven (read economically recoverable) reserves of fossil fuels in the ground to contain climate change to within reasonable limits. It also says that the world is currently not exploiting over 60% of the potential efficiency in transportation and over 80% of the potential in buildings.

Focusing on false hopes of a supply boom could dangerously distract attention from what should be the two greatest energy priorities. Climate change and efficiency.