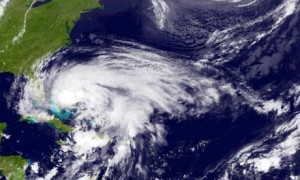 As the Frankenstorm descends on New York, there is a heated debate as to whether this is climate change in action.

As ever, Andrew Revkin takes a cautious line in the New York Times, arguing that “there remains far too much natural variability in the frequency and potency of rare and powerful storms — on time scales from decades to centuries – to go beyond pointing to this event being consistent with what’s projected on a human-heated planet.”

Joe Romm from Climate Progress argues this is climate change in action. He writes that “the name “Frankenstorm” fits. The unique severity of the storm is the point! Manmade warming has consequences.”

Writing in Alternet today he quotes various scientists and scientific studies highlighting the link between a wetter warmer world and more extreme. One of those is  Dr. Kevin Trenberth, former head of the Climate Analysis Section at the U.S. National Center for Atmospheric Research who writes: “The answer to the oft-asked question of whether an event is caused by climate change is that it is the wrong question.  All weather events are affected by climate change because the environment in which they occur is warmer and moister than it used to be.”

What is sure though is that the Frankenstorm is what we can expect from a warmed world.  It is another alarm bell as to why we should be disinvesting from fossil fuels as soon as possible. There are those who argue that natural gas – even from fracking – is somehow cleaner than oil, and a useful bridge between dirtier fossil fuels and renewable energy.

But now new research by British scientists has claimed that the US shale gas boom is not curbing greenhouse gas emissions as much as its proponents claim. The reason for this is simple: we live in a globalised energy world. Although the fracking revolution has led to the US burning less coal, all America has done is export more coal, instead of burning it at home.

The report, Has US Shale Gas Reduced CO2 Emissions? produced by scientists at the University of Manchester, who are part of the Tyndall Centre for Climate Change Research, concludes that US carbon emissions from domestic energy sources have fallen 8.6 per cent since peaking in 2005.

However these climate gains have been offset by a “substantial increase” in the amount of coal the US is exporting to the UK, Europe and Asia.

So much so that over half the emissions avoided in the US may have been exported as coal. In total, these exports are equivalent to 340 MtCO2 emissions elsewhere in the world, or 52 per cent of the 650 MtCO2 of potential emissions avoided within the US.

“Despite lower-carbon rhetoric, shale gas is still a carbon intensive energy source,” said Dr John Broderick, lead author on the report. “We must seriously consider whether a so-called ‘golden age’ [of gas] would be little more than a gilded cage, locking us into a high-carbon future.”

Indeed the report argues that without a cap on global carbon emissions, the exploitation of shale gas reserves is likely to increase total emissions.

“For this not to be the case, consumption of displaced fuels must be reduced globally and remain suppressed indefinitely; in effect displaced coal must stay in the ground. The availability of shale gas does not guarantee this,” it says.

And all the evidence is that our high carbon cage will produce more Frankenstorms.