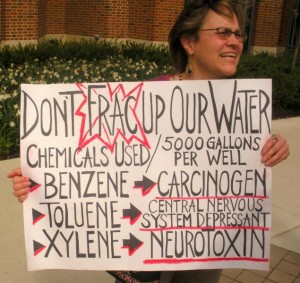 As fracking spreads like wildfires across the US and beyond, the debate rages about the ecological and health impact of this controversial technology.

The industry has always maintained that the technology is safe. Others disagree, but given the lack of hard scientific evidence, it has been difficult to prove otherwise. Films like Gasland have fuelled this already bitter debate.

But absence of evidence is not evidence of absence. And now the largest health survey to-date of residents living near fracking sites shows a clear pattern of negative health impacts associated with the technology.

Earthworks surveyed 108 residents in 14 Pennsylvania counties where fracking was occurring. They also conducted air and water tests at more than half of the households were surveys were completed.

Their main conclusions are that chemicals associated with oil and gas development are present in communities where fracking occurs. Residents in these communities report that after gas development began, they developed new health problems—many of which are known consequences of exposure to these chemicals.

And those living closer to fracking facilities report higher rates of impaired health, including sore throats and, sinus impacts and headaches.

Most worrying is that children living near gas development reported negative health impacts that seem atypical in the young. Surveyed children averaged 19 health symptoms, including severe headaches, joint pain and forgetfulness. Among all the survey respondents, it was children living within 1500 feet of facilities who had the highest occurrence of frequent noise bleeds.

“For too long, the oil and gas industry and state regulators have dismissed community members’ health complaints as ‘false’ or ‘anecdotal’,” argues Nadia Steinzor, Earthworks’ Eastern program coordinator and the project’s lead author.

She continued “The industry tries to shift blame onto residents themselves or onto any other possible source than oil and gas facilities, Now we know better. With this research, they cannot credibly ignore communities any longer.”

Earthworks argues – quite correctly – that its results show that states like Pennsylvania – are “risking the public’s health”, by allowing fracking to occur without adequate public health measures.

And the results back up evidence documented in the film Gasland. Over half the water well samples had elevated levels of methane, and some had iron, manganese, arsenic as well. Some samples  also had higher elevated levels of benzene, toluene, ethylbenzene and xylene too.  Another common complaint was odour, with over eighty per cent reported that they smelled something, including chlorine and the rotten gas smell associated with methane.

“It is clear from both the lab results and the reported health affects that the exploration of natural gas comes with consequences,” argues Calvin Tillman, former mayor of gas-impacted DISH, Texas and founder of ShaleTest.  He continued, “Industry needs to step up to the plate and quit denying they are damaging our lives and property.”