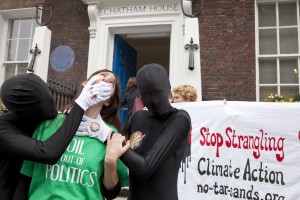 It is meant to be a prestigious event on climate change in London, where delegates assess “what national and international actions must be taken now to manage 21st century climate security challenges.”

The high profile event, happening yesterday and today at Chatham House includes some high profile key note speakers, including Ed Davey, the British Secretary of State for Energy and Climate Change; Christiana Figueres, the Executive Secretary of the UNFCCC and Connie Hedegaard, the European Commissioner for Climate Action.

So far so good, you might argue.  But then there are delegates who we know are not so keen on climate action:  Peter Kent, the Minister of the Environment in Canada and an executive from Shell spoke yesterday too. Indeed, Shell is sponsoring the conference as well.

If the irony of Shell, a company at the forefront of exploiting the dirty tar sands, being a sponsor of a conference on climate change was lost on the delegates, it was not lost on protestors.

For all did not go quite to plan yesterday. Delegates were met by campaigners from the UK Tar Sands Network demonstrating outside Chatham House, accusing Shell and Canada of “strangling” climate action.  Then two climate activists interrupted first Peter Kent, Canada’s Environment Minister, then Shell’s UK Chairman Graham van’t Hoff, as they got up to make speeches.

The first activist, Danny Chivers, referred to Kent as an “agent from a rogue petro-state” who was pursuing a “radical ideological agenda” of tar sands expansion. Chivers said Kent was “part of a dangerous anti-environment group called the Canadian Government, who were committed to wrecking the climate by handing over vast swathes of indigenous people’s land to oil companies, for them to rip up and extract some of the most polluting fuel on earth”.

Chivers was removed by security

The second activist, Sophie Preston, then rose as the Shell executive Graham van’t Hoff was about to speak. She accused Shell of being “world-class greenwashers”,  while lobbying against national and international climate action. She told delegates that Shell was developing the dirty tar sands despite a legal challenge from the Athabasca Chipewyan First Nation who claim their treaty rights have been violated. She too was removed by security.

Danny Chivers, the author of ‘The No-Nonsense Guide to Climate Change: the Science, the Solutions, the Way Forward’, said later that “Inviting Peter Kent and Shell to speak at a climate change event is like asking the Cookie Monster and Homer Simpson to address a conference on healthy eating … They are part of the problem and certainly should not be held up as experts in a discussion about effective climate solutions.”

Sophie Preston, added: “I have been to Canada and seen first-hand the devastating effects of tar sands oil extraction on the local environment and Indigenous communities whose rights are being violated. So I am very distressed to find that lobbying by Canada and Shell is now also scuppering attempts to make effective climate policy in the EU and internationally.”