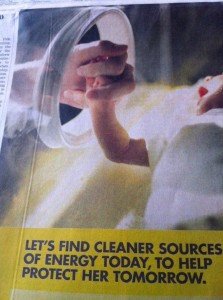 The advert in the weekend edition of the Financial Times is heart-warming (see image).

It includes a picture of a premature baby, mouth slightly ajar as if wanting feeding, with her mother holding her tiny hand through the opening of an incubator. It is a picture of life at its most vulnerable. A new born needing love, nurture and protection.

The headline of the advert re-iterates the theme of protection and responsibility, saying: “Let’s find cleaner sources of energy today, to help protect her tomorrow”.

The advert is by Shell, the oil giant. “Let’s go”, says the strap headline. Even these words are meant to symbolise that somehow Shell is the dynamic leader and that we, the people, will somehow follow.

Hold that image of the baby – with soft light caressing its face – and Shell’s promise to develop cleaner sources of energy, with the actions of its hard-nosed lawyers and executives.

On Friday, Shell sued Greenpeace in an attempt to have the environmental organization banned from holding any protest within 500 meters of any Shell property, or face a staggering €1 million ($1.3 million) fine.

This is legal intimidation at its most perverse and most desperate. The company knows that its plans to drill in the Arctic are one of the most hotly contested and controversial decisions it has taken in years.

Ironically if the company was true to its adverts, it would not be drilling in the Arctic at all. Instead its scientists should be in the Arctic monitoring the record ice melt and telling the company that the climate is in trouble and it needs to rapidly disinvest out of fossil fuels. Shell just needs to do what its own advert says: “Let’s find cleaner sources of energy today, to help protect her tomorrow”.

Shell’s legal argument against Greenpeace is nonsensical. It argues that it “continues to respect the legitimate right of people to peacefully protest against the activities we undertake to ensure the world’s energy needs are met.”

At the same time it then says that Greenpeace’s recent actions have “have gone well beyond the limits of acceptable protest,” and its actions “bring human lives and the environment in danger.” Lets remember who is doing the risky drilling here.

Greenpeace campaigner Ben Ayliffe argues that Shell was “in no position to accuse others of being reckless or unsafe.” It says that Greenpeace rightly called the move a “legal sledgehammer to stifle public discourse.”

One of Greenpeace’s many complaints against Shell is that it is wholly unprepared for a spill in the Arctic. And if the oil giant’s record in Nigeria is anything to go by, Greenpeace and everyone else has good reason to be worried.

Yesterday, the Observer reported that two huge crude spills from a Shell pipelines in the Niger delta four years ago have still not been cleaned up by the company.

Despite an outcry by the UN, Amnesty International and the Nigerian government about pollution in the area, Shell has has not fulfilled a promise to clean up near the Ogoni village of Bodo.

An assessment has found that the most contaminated areas remain untouched. The lawyer representing the 11,000 affected villagers, Martyn Day has just returned from the Delta, where he was part of a team assessing the clean-up. “Next to nothing has happened and where work has commenced it has been totally amateurish,” he argues.

So Shell talks responsibility and protection. But in its wake lies broken promises and dirty pollution.