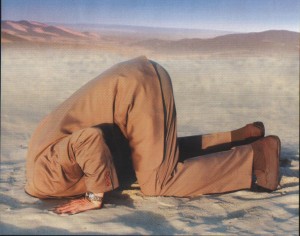 For the last few weeks scientists have been warning about the record sea loss in the Arctic.

Last Friday, in a great piece of journalism, John Vidal, the veteran environment correspondent from the Guardian, reported from the front line of climate change.

Vidal is a few hundred miles from the north pole on board Greenpeace’s Arctic Sunrise,  which is carrying scientists who are recording the record ice loss. More than 600,000 square kilometres more ice has melted in 2012 than was ever recorded by satellites before.

As Vidal writes: “The record hasn’t just been broken, it’s been smashed to smithereens, adding weight to predictions that the Arctic may be ice-free in summer months within 20 years”. Scientists aboard the Arctic Sunrise are shocked at the speed and extent of the ice loss.

Scientists are recording the effects of climate change and it is scaring them. Cambridge University Sea ice researcher Nick Toberg, told Vidal: “This is staggering. It’s disturbing, scary that we have physically changed the face of the planet …. It has never decreased like this before”.

For years the scientists have been warning about the dangers of climate change – a rapidly warming Arctic, more extreme and violent weather.

The 30 year campaign to discredit these voices and deny climate change orchestrated by the fossil fuel industry is now well documented: If you don’t believe me read: Jerry Leggett’s Carbon War or Naomi Oreskes and Erik Conway’s Merchants of Doubt, or James Hoggan’s Climate Coverup or Michael Mann’s deeply disturbing Hockey Stick and the Climate Wars. And if that is not enough, there are more books and hundreds of other articles about the crude crusade to deny climate change.

The denial industry has tried to delay and derail and cloud the clear cold facts that scientists have been warning us since the eighties that we are heading for trouble. This year’s violent heatwaves in the US, the wettest summer in the UK and record sea-ice loss in the Arctic are all the reality of climate change. All these events are exactly what the scientists have predicted. The only problem is that the Arctic sea ice loss is happening faster than the models predicted.

Everything is interlinked. New research suggests that the loss of ice could be could be affecting the path and speed of the jet streams, a possible reason why extreme weather in the northern hemisphere is lasting longer.

The reality, whether we like it or not, is that the Arctic ice loss affects us all.

Today may be the day that the record sea ice loss is officially announced. It will be another indicator from the front line that we are in trouble. But the politicians make speak words of concern, but they will not take drastic action.

The UN process is in gridlock. Much will depend on the outcome of this November’s presidential election in the US. If Romney wins, we face four more years of political ineptitude. It may be the same if Obama wins, depending on the outcome of what happens in Congress.

When will the politicians finally take the decisive act? Will they ever act?. “This is a defining moment in human history,” argues Kumi Naidoo, director of Greenpeace International in Amsterdam. “Our politicians are putting corporate interests above scientific warnings and failing in their duties to the public”.

It begs the question what will be the single climate change related event that finally forces radical political action?

How many people will have to die before the public interest overcomes the corporate interest?

So far our response, from any rational perspective, is completely bonkers. Damian Carrington from the Guardian pointed out on Friday that the Arctic ice data shows that “our planet is waving the white flag of surrender”, but our response is to pump “ever more globe-warming gases into the air.”

Carrington wonders whether: “Decades from now, will today’s record sea ice low be seen as the moment when our Earthly paradise gave up the ghost and entered a hellish new era?”

We don’t know yet, but you would think that the record sea ice would be the news that finally forces political action. But you know it won’t be.

Even since Friday, there has been more bad news from the front line of climate change. Yesterday, scientists warned that the chance to save the world’s coral reefs from damage caused by climate change is dwindling. They too are in trouble.

“The window of opportunity to preserve the majority of coral reefs, part of the world’s natural heritage, is small,” said Malte Meinshausen, co-author of the report published in the journal Nature Climate Change. “We close this window if we follow another decade of ballooning global greenhouse-gas emissions.”

If we allow another decade of soaring emissions, or if we wait for the Arctic to be ice free before we act, it will be far, far, too late.