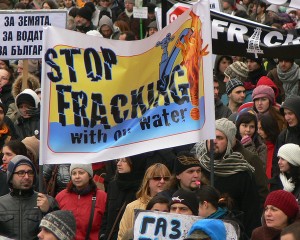 “In the middle of the last decade”, writes Ed Crooks in today’s special report on energy in the Financial Times, “it looked as if the end of the Oil Age was in sight in the Americas. Not imminently, perhaps, but the sunset was starting to come into view on the horizon.”

But the twilight era has been put on hold by the shale gas revolution. “Today that outlook has been transformed: energy in the Americas appears to be entering an era of plenty,” Crooks argues.

According to the Energy Information Administration, a US government agency, shale gas can increase the world’s technically recoverable gas resources by 40 per cent.

It is this fact that is exciting the oil majors, no more so than Chevron, which has started gobbling up the best shale gas acreage, especially that which is close to large areas of demand. For the oil giant this means the countries of Eastern Europe; more specifically the Trans-European Suture Zone that stretches from the Baltic to the Black Sea.

So far Chevron is exploring 1.2 hectares in Poland and Romania and has agreements with Bulgaria and Ukraine.

But the FT points out that the reason the US shale gas revolution has been so successful is that hundreds of wells were already drilled, meaning much of the data was already there.

Little is known about these basins in Eastern Europe, and the only way to get the reliable data will be to drill hundreds, if not thousands of wells.

And that is where we get to the heart of the problem. Will communities across Eastern Europe stand by whilst their groundwater is contaminated? Already a backlash is growing. Last January, the Bulgarian government withdrew Chevron’s license after widespread protest in a wheat growing area (see photo).

Despite this, there is a real concern that the oil companies could exploit the poorer and potentially more needy countries of Europe, as the richer ones reject fracking.  We already know the EU has concerns about fracking (see yesterday’s blog).  We know that the EU does not have sufficient legislation to cover fracking and it is unlikely that many countries in Eastern Europe do either.

Meanwhile, France has outlawed the practice and Germany is said to be in “two minds” regarding fracking.

Germany stands at an energy cross-roads, as an “energy transformation,” or “Energiewende,” is underway. The country is committed to phasing out nuclear power in light of the Fukushima disaster leaving an energy gap that could, in theory at least, be filled by fracking. The country is said to have 2.3 trillion cubic meters of “technically producable,” reserves.

However last week, a report prepared by the German Environment ministry concluded that fracking could contaminate ground water. It joined the voices urging caution.  “All concerns must be addressed before fracking technology is put to use,” Environment Minister Peter Altmaier said.

The best way to address those concerns would be to invest in renewables instead.