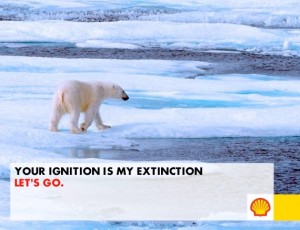 Yesterday marked the beginning of the end for the Arctic.

Yes the oil industry has been drilling in the high North on Prudhoe Bay for decades now, but yesterday oil giant Shell begun drilling the first well in the Arctic Chukchi Sea in more than two decades.

Yesterday morning, Shell’s Noble Discoverer drill-ship began to cut a “pilot hole” into the seabed in 130 feet of water in thye Chukchi, off the north-west coast of Alaska.

It is the first stage of a well ultimately intended to reach oil some 8,000 feet below the surface. You can watch the clanking, squeaking drill bit on its Burger A prospect enter the water on Youtube.

The well has been a long time in coming. Shell has spent some $4.5 billion in seven years to get to this point.
Pete Slaiby, Shell’s vice-president for Alaska, said: “I am very excited: this is potentially starting a new chapter for Alaska’s oil and gas industry.”

And that chapter could well be the end of the Arctic as we know it. We know that despite the billions, Shell is not prepared for a spill on any size. We also know from the Exxon Valdez spill that oil has a devastating effect on the fragile Arctic waters. We also know from the Deepwater Horizon that, despite the promises, corners are cut, safety is compromised and disasters do happen.

Shell’s own operations do not inspire confidence. Shell’s containment system for catching oil leaking on the seabed is still in port in Washington state, mounted on a barge called the Arctic Challenger. Until the Challenger is in place, Shell can drill but cannot penetrate the oil-rich zones.

Indeed, according to documents obtained under a Freedom of Information Act request in the US, suggest field-testing of a crucial containment dome aimed at controlling an oil spill in the event of a blow-out took place for only two hours.

The documents were obtained by Public Employees for Environmental Responsibility (PEER), a US group that helps federal and state employees raise the alarm on environmental protection issues. It was said to be shocked at what it found.

“The first test merely showed that Shell could dangle its cap in 200ft of water without dropping it,” said Kathryn Douglass, a PEER lawyer. “The second test showed the capping system could hold up under laboratory conditions for up to 15 minutes without crumbling. Neither result should give the American public much comfort.”

There were no independent tests undertaken by the US authorities.

PEER are not the only ones amazed by this lack of testing. “Such recklessness wouldn’t look out of place in a stock-car race,” Ben Ayliffe, senior Arctic campaigner at Greenpeace told the Guardian. “Whatever Shell is able to do in the narrow window between now and when the sea ice returns, it won’t erase the clear evidence we’ve seen in the past two months that there’s no such thing as safe drilling in the Arctic.”

The Center for American Progress have made a film on the risks of drilling and the “seemingly endless pristine environment that could be spoiled forever by a single misstep like the one that caused the BP disaster.” Watch it here.

The film argues that the ghost of Deepwater hangs like a dark shadow over the Arctic.  We know that despite the promises, Shell is not ready for a spill. It’s a simple as that.

And if the company finds oil, the Arctic oil rush will truly begin and a catastrophic spill could only be a matter of time. If this happens, the consequences would be unimaginable.  For many native Alaskans, it would be the end of life as they knew it. Possibly forever.