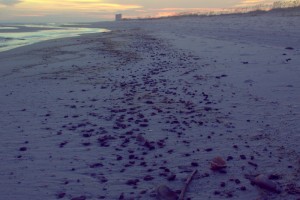 BP’s disastrous Deepwater Horizon spill in the Gulf of Mexico refuses to go away.

The Daily Telegraph in the UK is reporting that BP is being sued for tens of millions of dollars in America US by institutional investors.

The investors – the South Yorkshire Pensions Authority, Skandia Global Funds and GAM Fund Management – bought BP’s shares either immediately before or after the disaster. They argue that they would never had done so “had they known the truth”.

They are claiming that BP and its then chief executive, Tony Hayward, misled them over its “safety first” policies in the years before the disaster. The suits allege that “These ‘safety first’ statements were “materially false and misleading”.

BP “paid only lip service to such reforms, lacked any tools for dealing with oil disasters such as deep water spills, and continued to operate by sacrificing safety for savings. Indeed, BP’s reform failures led directly to the April 2010 disaster.”

To make matters worse, BP also misled them after the spill too.  The investors allege that, after the explosion, BP “issued statements intended to assure investors that the leakage was limited and containable, that BP had done nothing wrong, and that consequential damages would be limited” and that “these statements minimised the decline of BP stock prices, and induced Plaintiffs to purchase additional shares”.

In conclusion they claim BP executives “acted in reckless disregard of the truth, ignoring and concealing indications that the disaster was much larger than investors were being led to believe”.

According to the Telegraph, the funds allege that they lost “substantial sums as a result of BP’s misleading statements”.

They are suing for millions of dollars under Texas law for common law fraud and negligent misrepresentation, and for statutory fraud.

The news comes as tar balls have started washing up on the Gulf Coast in Alabama in the wake of the Hurricane Isaac. Pictures from Greenpeace are here.

Last week, the neighbouring state of Louisiana had asked residents to keep an eye out for tar balls. “It is possible that oil and oily material present in the environment as a result of the 2010 Deepwater Horizon oil spill will wash up on beaches, barrier islands, marshes, and other areas along Louisiana’s coast during and following severe weather events,” said a notice on the state’s emergency notification website.

BP was defiant though, saying that any tar balls would not be expected to cause “any significant impact”.