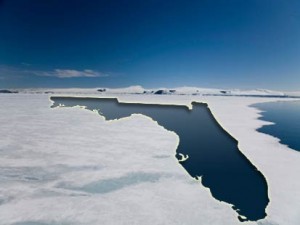 Sometime later this month, the sea ice in the Arctic Ocean is likely to shrink to its smallest ever size.

“A new daily record … would be likely by the end of August,” Ted Scambos, lead scientist at National Snow and Ice Data Center in Boulder Colorado said yesterday. “Chances are it will cross the previous record while we’re still in sea ice retreat.”

This is bad news. Ice retreat records are normally broken in early September. If this happens in August there will be worse to come.

According to Scambos, this summer could see the ice retreat to less than 1.5 million square miles, which would be an unprecedented low, beating the previous record of 2007. Scambos argues that the reason for the rapid sea ice melt is clear: “Everything about this points in the same direction: we’ve made the Earth warmer,” he argues.

Overall, according to the Data Center, the decline of Arctic sea ice has happened faster than projected by the United Nations Intergovernmental Panel on Climate Change five years ago.

The loss is worrying scientists:  “Our greatest concern is that loss of Arctic sea ice creates a grave threat of passing two other tipping points — the potential instability of the Greenland ice sheet and methane hydrates,” says NASA’s top climate scientist, James Hansen.

There is compelling and deeply disturbing evidence that warming is accelerating ice melt in Greenland too.

In mid-July, NASA satellite images showed that over just a few days, nearly all of the veneer of surface ice on Greenland’s massive ice sheet was thawing, breaking a more than 30-year record.

Also in July, an iceberg twice the size of Manhattan broke off Greenland’s Petermann Glacier, an event that University of Delaware professor Andreas Muenchow called “one of the manifestations that Greenland is changing very fast.”

Then last week, scientists announced that melting over the Greenland ice sheet has already “shattered the seasonal record” set in 2010. Professor Marco Tedesco, whose research was sponsored by NASA and the National Science Foundation  concluded: “With more yet to come in August, this year’s overall melting will fall way above the old records. That’s a goliath year – the greatest melt since satellite recording began in 1979.”

Another scientist who is worried  is Jason Box, from the Byrd Polar Research Center who spends much of his time doing field work in the Greenland.

“Greenland is a sleeping giant that’s waking,” says Box. “In this new climate, the ice sheet is going to keep shrinking – the only question is how fast.”

What is interesting about the Arctic / Greenland story is how little media coverage the issue has received. Reuters and Bloomberg have covered the Arctic melt story over the last few days along with the Huffingdon Post, but Media Matters pointed out that not one of the major broadcast (ABC, CBS, NBC), cable (CNN, Fox News, MSNBC) or print (Associated Press, New York Times, Washington Post, USA Today, Los Angeles Times, Wall Street Journal) covered Marco Tedesco’s research findings last week.

At least the WSJ covered one Greenland story back in July.

Ted Scambos argues that: “I absolutely think the media should cover this more, along with the record-breaking pace of Arctic sea ice loss for the summer … these events need to get on people’s radar. Our planet is trying to get our attention.”