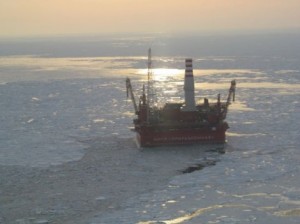 Much of the focus recently about the dangers of Arctic drilling has focused on Shell’s plans to drill off Alaska.

But let’s not forget about the real and growing dangers to the Russian Arctic too. Once again it seems that the oil industry is not prepared for the risks of a spill and maybe operating illegally.

Yesterday Greenpeace and the World Wildlife Fund unveiled a report assessing the risks of an oil spill in the Pechora Sea in Russia’s Arctic. The report was written by an independent Russian think-tank, the Informatika Riska Center.

In the Pechora Sea, the Russian state-owned company Gazprom has installed a massive drilling platform: the Prirazlomnaya.  Currently the platform is about 1000 kilometres from the nearest port, which is Murmansk.

The report argues that because of the remote nature of the region it would take emergency teams about three to four days to respond to any spill. Meanwhile oil could contaminate local nature reserves on the shore within about 20 hours after a spill, meaning the potential damage to wildlife and the local ecology could be catastrophic.

“It seems that in case of [an] extremely large spill … the nearby nature preserves cannot be avoided with 100% guarantee,” project manager Valentine Jouravel at Informatika Riska Jouravel told the Los Angeles Times.

Greenpeace International’s director, Kumi Naidoo, reiterated a similar message at a news conference yesterday:  “An oil spill in the Arctic would be virtually impossible to clean up,” he said.

According to Greenpeace’s analysis, Gazprom’s equipment can cope with a spill of 500 tonnes  – in comparison BP’s Deepwater Horizon spill in the Gulf of Mexico was a massive 5 million tonnes.

In its response plan, Gazprom includes 15 shovels, 15 buckets, and a sledgehammer.

If that is not worrying enough, Greenpeace has also discovered that Gazprom’s oil spill response plan for the Prirazlomnaya is actually out of date.  It expired in July.

The Russian Ministry of Emergency recently confirmed in a letter to Greenpeace Russia that the oil spill response plan, which was approved in 2007 has expired. Greenpeace is therefore arguing that any drilling in this part of the Arctic actually would be illegal under Russian law.

Ben Ayliffe from Greenpeace said:  “Gazprom are in breach of Russian law and they are in breach of almost every internationally agreed operating standard by failing to have an oil spill response plan in place.”

Despite this Gazprom is pressing ahead with its plans to drill for oil this summer, and may well be drilling there now. No one really seems to know, as the area is so remote.

But millions of people will be seeing another side of Gazprom this weekend, as the energy giant recently signed a sponsorship deal with Chelsea Football club in the UK.

As the new football season starts, just don’t ask Gazprom where its spill response plan is….