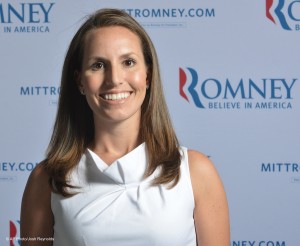 Good old Kert Davies. If you don’t know Kert he is the Research Director for Greenpeace US.

I am sure Kert won’t mind me saying that he has a slightly unhealthy obsession with climate sceptics and those who push climate denial.

He has had this obsession for a while.  It was Kert who was behind the amazing pioneering Exxon Secrets database that laid bare the brutal extent of Exxon’s funding of climate denial.

He later turned his attention to the secretive Koch brothers, and their funding of the climate denial movement. This important research has been republished around the world, as people began to understand the far reaching influence of the Koch’s.

And Kert keeps digging, looking at the climate denial movement.

Yesterday Greenpeace released a briefing paper detailing how the Press Secretary for Presidential hopeful Mitt Romney, Andrea Saul, was involved with DCI Group, a firm that was on contract to Exxon at the height of the oil company’s campaign to undermine climate change science.

DCI Group is a top public relations firm that has represented a range of clients including the Burmese junta and has orchestrated front group campaigns for Microsoft as well as for Exxon.

For Exxon, DCI’s efforts included campaigns to undermine climate legislation as well as and pushing counter messages on the connection between extreme weather and climate change.

Saul has been Romney’s press secretary since 2011. She is frequently the public face and voice of the Romney’s campaign, including articulating Romney’s contradictory positions on climate change.

However, between 2004 and 2007, Saul helped orchestrate a major campaign to undermine climate science. The Greenpeace briefing paper outlines how Saul:

•    Advanced the opinions of contrarian scientists and corporate-funded pundits on the Exxon-funded Tech Central Station, a purported news web site;
•    Sought to promote contrarian voices into the debate over hurricanes and climate change in the aftermath of Hurricane Katrina;
•    Promoted the views of a scientist who had no training in climate change to undermine a study on climate change effects on the Antarctic ice sheet;
•    Led a public relations campaign to undermine scientific consensus on the science of climate change;
•    And pushed out press releases for a front group linked to lobbyist Grover Norquist designed to undermine pending climate change legislation.

One person who was a target of the DCI-smear campaign was climate scientist Michael Mann: “Andrea Saul and the others at DCI Group who carried out this attack on climate scientists and their work helped to delay any serious actions to combat climate change and its impacts, at great cost to society.”

To this Kert adds that “It’s clear that Saul was part of campaigns that spread anti-science misinformation that has had far-reaching effects on public understanding of climate change.  Voters deserve to know if Saul’s views on climate and science are shaping Romney’s policies”.

Currently Saul’s role in shaping Romney’s climate and science policy is not known.