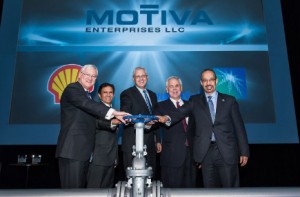 While Chevron’s Richmond refinery has been making the news lately with a very visible incident, our attention has been drawn to less noticed recent events in America’s biggest refining center on the Gulf Coast, where what was to become the country’s largest refinery also ran into a spot of trouble.

You’d think that if you had spent 5 years and over $10 billion building a new refinery you might get to run it a few months before you had to shut it down for repairs. Not so the Motiva Port Arthur refinery expansion, which is essentially a new refinery bolted onto an old one.

Motiva, which is jointly owned by Royal Dutch Shell and Saudi Aramco, started up the 325,000 barrel per day refinery units, (which bring the plants full capacity up to 600,000 b/d, the largest in the United States), in April.

On May 31, as the plant neared its full capacity, the newly expanded plant was officially reopened by Shell CEO Peter Voser and his Saudi Aramco counterpart, Khalid Al-Falih (pictured above).

By June 9 it was shut down.

The official story repeated by Reuters and various Texas news websites is that there was initially a vapour leak and while the unit was shut down to investigate, certain other valves were not “completely blocked off” allowing a chemical known as caustic (sodium hydroxide) to enter the crude unit, vaporize and become a highly corrosive agent. This quickly corroded stainless steel pipes and other parts of the unit causing cracks.

So a minor leak has become a major headache. After more than a month of speculation over how long the new 325,000 b/d plant would be out of operation, Motiva announced in late July that it would be early 2013 before it would be restarted, they did not specify a date. The cost of repairing the damage is estimated to be between $300-400 million.

Some further insights come from a petroleum coke trader reported in July’s Petroleum Coke Report (subscription only). Apparently the old coker in the plant was overdue for maintenance.

“They were waiting to turn on the new refinery because the markets for gasoline have been so bad. But they spent so much that they felt they had to turn it on. In the meantime, the old coker was overdue for a tuneup and was getting worse and worse, so they finally turned the new one on and the coker worked but the unit that feeds the coker was found to be corroded, and they shut it down.”

The outdated coker is not mentioned anywhere else and the company is tight lipped offering only the most basic details on its website. Shell, the partner that was in charge of the $10 billion expansion, doesn’t even mention the incident on its website, with the opening ceremony the only thing listed in “Latest Developments” on the refinery’s main page.

Seasoned Shell watchers note the similarities with other disasters at Shell-managed mega-projects. The pattern being:

None of this bodes well for Shell’s latest big adventure, drilling in the Arctic.

The new refinery units were designed to process heavy oil, or what Shell describes as, “even the lowest quality” crudes. Being in Port Arthur the refinery would have easy access to Keystone XL deliveries if it’s built, but the company has always been elusive about whether it would process oil from Canada, emphasizing that the new equipment would enable the flexibility to process a range of crudes.  It seems highly unlikely that it wouldn’t take some KXL crude given the plant’s size, location and equipment.

However, in the meantime the plant was planning on receiving a substantial proportion of its feedstock from its Saudi partner and the outage has reduced the flow of oil from Saudi Arabia that had been prolifically flowing since the beginning of this year. Platts (subscription only) reported this week that Saudi Aramco lowered its prices for Arab Medium and Heavy, possibly because the available supplies for those grades is greater as a result of Aramco not been sending (sic) extra cargoes to its co-owned Motiva refinery expansion.

Motiva’s Port Arthur refinery asked Saudi Aramco to put a hold on supplies bound for its new crude unit at the end of June after the new 325,000 b/d unit was shut…

Missing out on the good times

Motiva is not only spending $300-400 million more than it expected on an already very expensive expansion, but it is also missing out on some good times down on the Gulf Coast. Heavy oil refiners in the region have been making unprecedented profits in recent months.

The Petroleum Economist reports (subscription only) that while Gulf Coast refiners on average have been making $10 a barrel over the last 18 months, a margin that refiners in most other regions of the world would envy, those operating delayed cokers, the equipment used for processing heavy oil, were raking in $17/b in April. In comparison, refiners in Europe and Asia have been lucky to make $2-4.

The reason behind the Gulf Coast coker boom?

Refiners with cokers can buy the cheapest heavy crudes and maximize their output of valuable transport fuels. But they need lots of lots of energy to do that which currently comes cheap because of the shale gas boom. There are currently no carbon regulations that would force them to pay a sensible price for the vast consumption of energy that makes heavy oil refining possible.

But what’s sealing the deal at the moment is the export boom. Gulf Coast refiners have access to not only the biggest domestic market for oil products in the world, the United States, but because they have access to deepwater port facilities, they can export to just about any part of the world. In other words, they can sell to the highest bidder and make the widest possible margin.

Motiva will be watching the market over the next few months as it struggles to get its equipment working again. It may well find it has developed more of a taste for the cheapest and lowest quality crude on the market should it be able to get hold of some; good old Canadian tar sands.