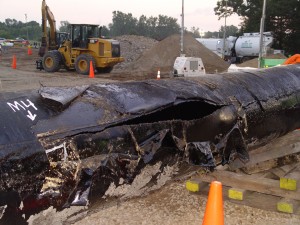 A couple months ago, Oil Change International worked with Earth Track and NRDC to expose a huge loophole that allows tar sands producers to avoid paying their fair share into the Oil Spill Liability Trust Fund.

Oil producers generally pay into this fund, but through a exemption in the tax code, tar sands oil producers currently do not have to pay into it despite the fact that diluted bitumen (aka tar sands oil as it is transported in pipes) is more corrosive than conventional oil and thus more prone to pipeline failures.  The Oil Spill Liability Trust Fund is a critical insurance policy to support local communities to cover the costs associated with cleaning up the inevitable oil spills around the country.

Our briefing (found here) found that this exemption amounts to a free ride of over $375 million between 2010 and 2017.  OCI Research Director Lorne Stockman wrote more about it here.

First from Inside Climate News, “Is Dilbit Oil? Congress and the IRS Say No”, highlights the hypocrisy inherent in the tar sands industry’s claim that tar sands oil similar to conventional crude oil while on the other hand using its unique qualities to obtain the exemption from contributing to the Oil Spill Liability Trust Fund.  They go on to outline the increased risks for spills from the tar sands, quoting our own Lorne Stockman, who said:

“The question is why we should continue this exemption given that it’s clear tar sands oil is more likely to spill because it’s more corrosive…and more and more tar sands is coming into the U.S.”

The second report comes from the Democrats on the House of Representatives’ Natural Resources Committee. Committee staff released a report outlining this tar sands loophole, entitled “Tax Free Tar Sands: New tax loophole give tar sands a free ride”.  Democratic Ranking Member of the Committee Rep. Ed Markey of Massachusetts has followed up on the report with a letter to Treasury Secretary Timothy Geithner urging a reversal of the IRS decision on the matter.  More on this can be found in their press release here.

Doug Koplow of Earth Track – who we partnered with to produce our briefing on this issue in May – has a great rundown of these new reports.  In his rundown he expresses some hope that this increased attention to this issue may result in some action on it.

In short, these reports reinforce our findings from May, that such an exemption is not only irrational but possibly dangerous given the risks associated with transporting tar sands.  Given how much money is at stake for this dirty industry, the more people highlighting such loopholes, the better…because we know this industry will pull out all the stops to protect its billions in subsidies.