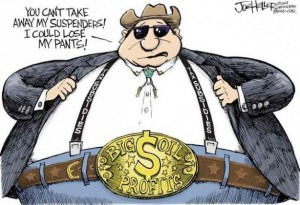 If you believe the press reports, you’d think that the oil industry was hurting of late, what with the headlines coming out of the most recent quarterly earnings reports saying things like, “Exxon and Shell Earnings Disappoint,” and “Occidental quarterly profit lower”, and “Chevron 2nd-Quarter Profit Off 6.8%; Upstream Earnings Fall”.  These headlines paint a picture of companies having a tough quarter.

And what’s more? Our taxes are going to subsidize these obscenely profitable, planet-destroying companies.  That’s right, each year the US government is giving somewhere between $10 billion and $52 billion in government handouts to the fossil fuel industry, to “help” them rake in these profits  (and globally fossil fuels are subsidized somewhere close to $1 trillion per year).  That’s your money being spent to subsidize rich companies fueling climate chaos.

So let’s get this straight: Oil companies here in the US are getting billions in government handouts and turning around and making billions in profits each quarter.  All this while putting our futures at risk and fueling the global warming that is impacting us even today. Billions in profits while lapping up our tax money as handouts and at the expense of future generations is hardly cause to feel sorry for the oil industry.

Bill McKibben’s recent piece in Rolling Stone calling out much of these points has recently caused quite a stir, reportedly having been “liked” more times than the magazine’s most recent interview with President Obama.  McKibben talks about the most recent “math” of climate change – the fact that the fossil fuel companies of the world are basing their entire profit model on a scenario in which the world will go into complete climate chaos.  As McKibben points out, fossil fuel companies currently have in their proven coal, oil and gas reserves five times more carbon than any reasonable scenario would allow for a safe climate future.  And these companies’ business model requires them to find ever more reserves and burn them until the very last bit of fossil fuel is extracted, no matter the cost to civilization.

Now, as always, there’s one wrinkle in this story. Because of these consistently impressive earnings, investors have come to view oil companies as cash cows. If you have a 401K plan, chances are it’s earning money based off these oil company profits. But if you look beyond short-term gains and towards our future, and think about all the impacts, it quickly becomes clear that these investments are shortsighted.  If our futures are put at risk by these investments, they certainly “disappoint” . It’s time the government evened the playing field by removing the massive subsidies to fossil fuel companies and help move us towards a cleaner, renewable energy future where investments can not only provide short-term gains but be consistent with a viable future as well.

So when you look at profits of $16 billion in only 3 months (Exxon), or even merely $6 billion (Shell), or that measly $2 billion (Chevron), we’re talking about huge profits that are being made at our expense in more ways than one. Being worried that these companies didn’t deliver even greater profits than they did last year ignores the fact that rather than funding our future, these companies are stealing it.  It’s time for that to change.