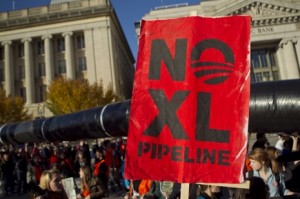 Ten of the America’s top climate scientists are sending a letter to Secretary Hillary Clinton today with a simple message:

The State Department has to conduct a serious review of the climate change impacts of the Keystone XL pipeline.

The State Department is currently accepting comments on the new scoping report that will determine what environmental considerations will be included in the Supplemental Environmental Impact Statement – known as the SEIS for short – required for the new leg of Keystone XL.

The Department’s previous EIS downplayed climate risks by arguing that the tar sands would be developed with or without Keystone XL.

But the scientists, who include Jim Hansen, from the International Research Institute for Climate and Society, at Columbia University; Michael MacCracken, from the Climate Institute and Michael E. Mann, from Pennsylvania State University, are warning against taking this approach in the new evaluation:

“At the moment, your Department is planning to consider the effects of the pipeline on ‘recreation,’ ‘visual resources,’ and ‘noise,’ among other factors” they write to Clinton. “Those are important—but omitting climate change from the considerations is neither wise nor credible.”

The scientists continue by arguing that: “The vast volumes of carbon in the tar sands ensure that they will play an important role in whether or not climate change gets out of hand; understanding the role this large-scale new pipeline will play in that process is clearly crucial.”

They finish by saying that “it would be a shame if that review did not manage to comprehensively cover the most important questions at issue.”

350.org is the organisation that released the letter this morning. May Boeve, the Executive Director of 350.org said: “Keystone became the biggest environmental cause of Obama’s first term–and the reason most of those who marched and went to jail gave for their concern was the climate impact of those vast tar sands. It would be ironic in the extreme if the State Department didn’t take the issue seriously in its review.”

I think many people would think that “ironic” would be an understatement. Anyway for those inclined, comments on the SEIS scoping evaluation have to be sent to the State Department before July 30. So get those responses in fast…