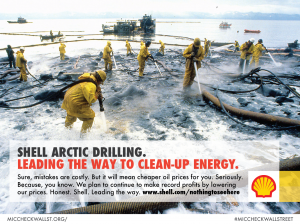 Poor old Shell. Last week it was humiliated in a spoof action by Greenpeace and the Yes Men. This week its corporate reputation takes a battering in a report by the Alaska Wilderness League.

The 51 page report, published as Shell gears up to start drilling in the Arctic, makes devastating reading.  It concludes that “Shell Oil Company cannot be trusted to safely drill in the Arctic Ocean.”

It adds that “behind the company’s slick public relations campaign is a disturbing history that cannot be ignored as they rush to drill in one of the country’s last wild frontiers.”

Having examined Shell’s operations around the world, the Alaska Wilderness League argues that the company “operates with a brazen disregard for the safety of its own workers, the needs of local communities both here in the United States and internationally, and the long-term impact of drilling on the environment.”

Instead of taking responsibility for its actions, “Shell simply pays fines and settles lawsuits.”

The report adds that “it seems that Shell considers lawsuits and clean-up costs just part of doing business, consequences to be paid while avoiding substantive changes to its operations that might interfere with the company’s efforts to maximize its already immense profits.”

Leah Donahey, the Western Arctic and Oceans Program Director for Alaska Wilderness League, argues that “If the Obama administration continues to allow Shell to have its way, the oil giant will be drilling in America’s Arctic waters next month. Our report on Shell’s track record gives the Obama administration yet one more reason to question whether or not Shell should be trusted with our one and only Arctic.”

Donahey continues that “As government and nongovernment experts alike have said, there is no proven way to clean up an oil spill in the Arctic’s extreme conditions yet Shell keeps telling us they have it covered. My question for President Obama is: How do we know that Shell won’t treat the Arctic and its inhabitants the same way that it treated Nigeria and the North Sea?”

Nigeria continues to be the weeping sore at the heart of Shell’s operations. We often focus more on Shell’s human rights abuses in Nigeria, but its environmental record is just as damning.

As I have said on this blog before, how any regulator can look at Shell’s record in Nigeria and then willingly allow the oil company to explore in a pristine wilderness like the Arctic is beyond me.

The report points out that Shell has a long history of “egregious environmental violations”  including in Nigeria. “In 2008 and 2009, the company’s trans-Niger pipeline in Ogoniland, Nigeria, had two breaks that caused approximately 10 million gallons of oil to be spilled – an environmental disaster equivalent to the Exxon Valdez oil spill in 1989.”

Before you wonder that Nigeria is an isolated case, the report also looks at the North Sea. “In 2011, Shell’s drilling operation was responsible for the worst underwater oil spill in the UK in a decade, spilling as much as 4,380 barrels of oil into the North Sea over 10 days. Shell failed to report the spill to regulators until two days after it began.”

In fact the company’s “North Sea operations have one of the worst safety records of any oil company operating in the UK, violating safety rules 25 times from 2005 to 2011 and spending at least $1.5 million in fines and legal costs.”

And if you think the US will be any better, the report examined safety data for 2007 and found that “Shell had the highest mortality rate of any large western oil company in the United States.”

As you read page after page of Shell’s spills, abuses and fines, the overriding message is that Shell cannot be trusted to explore in the Arctic.

The report quotes Sylvia Earle, the former chief scientist at the National Oceanic and Atmospheric Administration, who says simply:  “Drilling in the Arctic should make the hairs stand up on the back of your neck. There are values there that transcend the value of any fossil fuel we can extract — irreplaceable ecosystems that we don’t know how to put together again. There are some places you should not drill, period.”