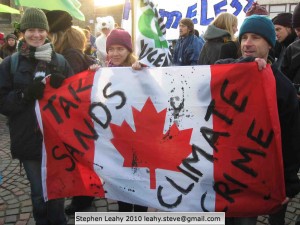 Only yesterday I was talking about hype and how the oil industry often plays the long game.

The Canadian Federal Natural Resources Minister Joe Oliver, who has become a real cheer-leader for the tar sands industry, argues that it could generate over than $3 trillion in revenue in 25 years.

That is a huge fat financial carrot to persuade people to back the controversial technology.

With this type of money there is no time to delay, argues Oliver.  “When these projects are delayed, the jobs and prosperity of Canadians are also delayed. A system that discourages investors and puts major projects at risk without creating any additional environmental benefit is not worthy enough for Canadians. We can and we must do better,” he said.

Oliver is at pains to point out that tar sands are a “responsible resource development” which is governed by “one of the most modern, efficient, effective and accountable regulatory systems in the world, backed by the best science and technology available.”

But Oliver and his colleagues continue to try and undermine the science of the tar sands.

One scientist they have attacked is Stanford University Professor Adam Brandt, a global expert on the carbon footprint of fossil fuels, who has acted as a consultant to the EU over its climate change legislation called the Fuel Quality Directive.

Brandt’s study for the EU was bad news for the Canadians as it showed that the tar sands are more carbon intensive than other fossil fuels. “I found that the oil sands were about 20 percent [23%] higher on a “full fuel cycle” basis, which is the metric [used] by the EU’s fuel-quality directive. This includes everything from extracting the fuel out of the ground, to refining it and burning it in your automobile,” says Brandt.

Last week, Brandt gave an interview to InsideClimateNews, which makes interesting reading.  He says the 20 per cent figure is “important because that number filters through everything that we do .. Another way to think about it is that…there’s been a big push towards fuel economy over the last few years…You see a lot of improvement in the fuel economy of cars that are being advertised on TV, for example. And so this 20 percent increase could offset or negate some of that fuel economy benefit.”

Asked why is Canada’s oil sands industry so concerned about the EU directive, Brandt replied that “The challenge for industries that produce higher carbon-intensity fuels is that the fuel becomes less valuable, because it makes it harder for an importer [in Europe] to meet their target if they’re importing some high carbon fuel. They would then have to import additional low-carbon fuel to offset this. This obviously is a concern for the oil sands producers.”

When asked if the tar sands industry’ expansion could cancel out the progress it makes in reducing greenhouse gas emissions through new technology and better practices, Brandt replied:  “It certainly could. There are plans to expand the industry quite a bit. So that could definitely offset improvements in terms of the total emissions.”

So here is the rub for Oliver. He is trying to argue that the tar sands are responsible and that they are improving the efficiency of the tar sands. But any gains in efficiency are going to be wiped out by Canada’s ambitious expansion plans.

And the conundrum that Canada cannot solve is that you might well generate $3 trillion in revenue in 25 years, but the harm you would do to the climate could itself cost trillions too. But who picks up that bill?