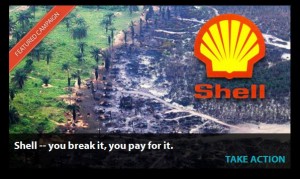 Seventeen years ago I was one of many protestors at Shell’s AGM in London at the prestigious Queen Elisabeth Centre that lies in the shadow of Big Ben, near London’s Parliament.

There were two issues facing the oil giant that day: in Nigeria the Ogoni playwright, Ken Saro-Wiwa, lay in a disgusting and degrading humid prison cell, incarcerated from the outside world for campaigning against the oil giant and trying to protect his people and land.

Out in the cold grey Atlantic, Greenpeace protestors lay siege to Shell’s Brent Spar oil platform, trying to prevent it being dumped on the sea bed.

In one bizarre moment we tried to have one of the Greenpeace protestors speak down a mobile phone into a loud-speaker to address the crowd outside the conference centre. Needless to say it did not work that well.

In contrast, Nigeria remains a running, oozing, weeping, polluting sore.  One that seems is incapable of being healed.

Seventeen years later, Shell’s AGM, which happens today, is no longer held in London but is now in the Hague. Apart from that little has changed. The pollution continues.

Yesterday, Friends of the Earth International, working with Amnesty International and SumofUs, announced that it would deliver a petition of 70,000 signatures of people who want Shell to start cleaning up its mess in the Niger Delta.

The petition will be handed in today.

Nnimmo Bassey, the director of Friends of the Earth Nigeria and chair of Friends of the Earth International, said:  “As we speak Shell is intensifying its poisoning of the environment and the peoples of the region. by our records Shell had over 200 oil spills in 2011 alone and the 2012 tally is rising already. Shell must stop the poisoning and start cleaning up its mess right now.”

Because Shell is doing so little, Friends of the Earth has started an international campaign which members of the public can support here  or you can sign the petition here.

But we should not forget that it is not just Nigeria where Shell’s presence is casting a long shadow. The company is also exploring in the Arctic.

As I have blogged before, how any company with the ecological record of Shell could be allowed anywhere near the fragile Arctic is beyond the comprehension of many people.

Shell could not operate in the Arctic without the backing of the financial institutions. So what about the financial risk of operating there?

A new report by Platform, Greenpeace and FairPensions, entitled ‘Out in the Cold – Investor Risk in Shell’s Arctic Exploration’ details Shell’s existing and planned oil exploration and production projects in the offshore Arctic.

The report highlights Shell’s failure to address key technical and management concerns in going into this risky territory:

•    Shell’s spill response plans are inadequate – it has not yet tested its well capping system (key equipment in case of a well blowout) in Arctic conditions – and has stated to the parliamentary committee that it has no plans to do so;

•    Shell is developing an extensive partnership with Russian majority state-owned company Gazprom, with an extremely poor safety and transparency track record. Shell is yet to answer to how it plans to limit its exposure to Gazprom’s malpractice;

•    In Russia Shell is also dealing with a history of cost overruns and government duress, which continues to be a concern particularly after Vladimir Putin’s return to the presidential seat.

The report argues that “the industry’s push into Arctic offshore extraction with regulatory and investor community support suggests that the correct lessons have not yet been learned from the tragedy of the Deepwater Horizon”.

Maybe the investor community should apply for the free trip that Friends of the Earth are offering for three people, so they can see for themselves what Shell’s record in the Niger Delta is like, and then imagine what that kind of pollution would do to the Arctic.

It would be millions times worse that the Brent Spar…