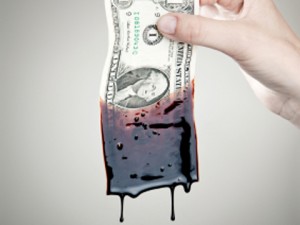 The House of Representatives took a non-binding vote earlier today on whether to support inclusion of the controversial Keystone XL pipeline in a transportation bill currently being negotiated by both chambers. It passed 261-152.

The influence of dirty energy money has once again reared its ugly head.

Those voting in favor of the inclusion of Keystone in the bill have taken over 11 times more money from Big Oil during this Congress – almost $6 million – than those opposed. On average, those supporting the move took 6.5x more money than those opposing it. And since 1999, supporters have taken $32.5 million from oil interests while those in opposition have taken $4.5 million.

We’ll add this to the 23 votes Oil Change has tracked in this Congress alone, in which the influence of the fossil fuel industry has strongly influenced decision maker’s support for industry-friendly regulations and subsidies.

A 47-person committee, with representatives from both the House and the Senate, is currently negotiating the transportation bill following an impasse over Keystone XL. The Senate’s version of the bill omits the pipeline. President Obama has also vowed to veto any bill overriding his decision to suspend approval of the pipeline pending additional environmental reviews.

And so the myth of Keystone continues… you know, the one that talks about how it will create jobs, lessen our dependence on foreign oil, lower gas prices… that one. Or should we be talking about the myth that our decision makers actually listen to the interests of their constituents, rather than the special interests that finance their campaigns?