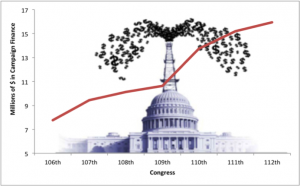 Members of Congress have taken almost $16 million from the oil, gas and coal industries so far in this 112th Congress. That puts this Congress on track to be the dirtiest ever.

The information comes to light as part of the latest update of DirtyEnergyMoney.com, a project of Oil Change International which uniquely refines and reveals campaign finance data from the Center for Responsive Politics. The work reveals a decade-long trend of the fossil fuel industry buying more and more influence on Capitol Hill. The full analysis is available here in pdf format.

–       Twelve members of Congress have taken more than $1 million from coal, oil and gas companies since 1999.

–       The companies doing the giving are led by the National Rural Electric Cooperative Association, which has provided just over $810,000. They are followed close behind by Exxon Mobil and Koch Industries, who have given $670,450 and $618,000 respectively.

Yes, it would appear so. The evidence suggests that donations can indeed buy Congressional support for preserving subsidies, or weakening environmental regulations.

For example, earlier this year the Senate voted on the Repeal Big Oil Tax Subsidies Act, which would remove $2.4 billion in subsidies annually to the top 5 Big Oil companies. It failed to pass, with those voting against the measure taking an average of almost $48,000 from the industry, with those voting for it taking just over $23,000 on average.

Sure, that might be a coincidence. But when it happens time and time again, we need to stand up and take notice. Oil Change International has tracked 23 votes from the 112th Congress that affect dirty energy interests. The majority of these votes have been attempts by House Republicans to remove barriers to expand drilling or to diminish the power of regulators to oversee operations. In all of these cases, representatives and senators voting with the interests of dirty energy companies received substantially more from those interests than those who voted against. Coincidence? That is not our view.

Ok, so what can we do about it?

Let’s not get too bogged down in how depressing this may seem. Let’s organize instead. We have the power to reverse this disturbing trend.  Here are some ways to get started:

–       Know your dirty number: Find out how much your decision-maker takes from the oil & gas and coal industries on the newly updated www.dirtyenergymoney.com. Use the tools on the site to send them an email and ask “What the f&*k?” (perhaps somewhat more tactfully) and demand they side with the many, not the money.

–       Use your voice around key battles related to fossil fuels, including subsidies, Keystone and fracking. We’ll keep you up to date on opportunities to speak out coming down the pike, and will appreciate your sharing your inspirations on our Facebook page.

This is a big week for conversations around subsidies in particular. Watch for another post soon about an opportunity to stop Congress from leaking over $11 billion in favors annually to the oil & gas and coal industries.

-This post was compiled by Karen Showalter with assistance from Steve Kretzmann.