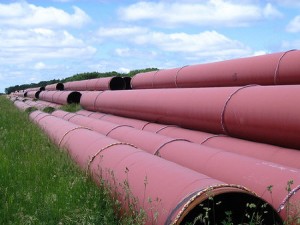 One thing is certain: pipelines have become a political hot potato. Over the next few months the debate about Keystone XL will surely dog the Presidential debate like a bad penny.

But as the furore over Keystone has grown it is easy to forget about the state of other pipelines in the US and how they are regulated. And what this tells us does not bode well for Keystone.

Take one region in the US: The Great Lakes. Nearly two years after one of the worst oil spills in Midwest history, a new analysis by the National Wildlife Federation (NWF) that was published yesterday reveals that laws governing oil pipelines do not adequately protect the region and its communities from oil pollution.

It was in July 2010, that Line 6B of Enbridge Energy Partners ruptured near Marshall, Michigan, causing one of the largest oil spills in Midwest history.

Approximately one million gallons of diluted bitumen, spilled into a wetlands and creeks which feed into the Kalamazoo River.

The cleanup from that spill is still ongoing.

After the spill in Marshall, the pressing question is whether laws governing pipelines have been updated enough to adequately protect the Great Lakes Basin from oil pollution.

But the NWF that that federal laws are inadequate in several respects and states have not passed their own laws to fill in the gaps.

“Spills like the one in Marshall remind us that oil pipelines pose significant risks to the environment, including the natural resources of the Great Lakes Basin,” said Sara Gosman, water resources attorney at the National Wildlife Federation and author of the report.  “Our report carefully analyzes pipeline laws and concludes that more can—and should—be done to protect these resources.”

“Pipeline safety is a problem that has remained under the radar for far too long,” adds Nick Schroeck, executive director of the Great Lakes Environmental Law Center. “Increasing public disclosure and strengthening environmental protection is long overdue.”

The report found that there is no federal review of the long-term risks associated with routing of new oil pipelines or consideration of impacts to entire watersheds such as the Great Lakes basin.

The federal Integrity Management program, which requires operators to assess the condition of existing lines, is inadequate as it only protects some environmentally sensitive areas.  Moreover, the Pipeline and Hazardous Materials Safety Administration, which oversees pipelines, gives companies too much discretion in how they manage their own pipelines.

Indeed a New York Times examination revealed that the federal pipeline agency had a chronic shortage of inspectors and left a great deal of regulatory control in the hands of pipeline operators themselves.

“It’s clear that the status quo is not getting the job done,” adds Sara Gosman, “and that stronger protections are urgently needed.”