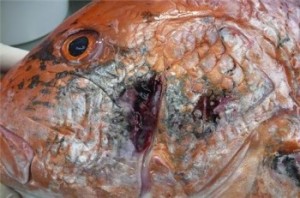 As the second Anniversary of the Deepwater Horizon spill was marked across the Gulf region at the end of last week, we know that we are still a long way from knowing the full impact of the spill on the marine ecosystem.

One thing is for sure though. The right-wing commentators who crowed that the “disaster was over” once the oil was said to have dispersed from the surface, are being proved horribly naïve, premature and deadly wrong.

“We saw the short-term impacts” of the BP spill, argues Larry McKinney, who heads the Harte Research Institute for Gulf of Mexico Studies in Corpus Christi.  “Two years later, we are starting to get information on the real cost. Oil disappeared from sight, but it did not disappear. It impacted things in the deep water.”

One of those to return to the region in the run up to the second Anniversary was the TV programme Al Jazeera. The TV channel interviewed fisherman with horror stories to tell. One commercial fisherman recalls a friend catching hundreds of pounds of “eyeless” shrimps. “ Disturbingly, not only do the shrimp lack eyes, they even lack eye sockets,” he said.

Another fisherwoman, Darla Rooks, told Al Jazeera she is finding crabs “with holes in their shells, shells with all the points burned off so all the spikes on their shells and claws are gone, misshapen shells, and crabs that are dying from within … they are still alive, but you open them up and they smell like they’ve been dead for a week”.

Al Jazeera interviewed Dr Jim Cowan from Louisiana State University’s Department of Oceanography and Coastal Sciences who had started hearing about fish with sores and lesions from fishermen in November 2010.

Along the Gulf there have been reports of collapsing fisheries, mutated shrimp, fish with oozing sores, underdeveloped blue crabs lacking claws, and eyeless crabs and shrimp.

Another recent scientific survey revealed the presence of oil in the bile extracted from fish caught in August 2011, a year after BP’s well was capped. “Bile tells you what a fish’s last meal was,” said Steve Murawski, a marine biologist with the University of South Florida.

Last summer, a team of scientists led by the University of South Florida, conducted the most extensive study yet of sick fish in shallow and deep Gulf waters. “The closer to the oil rig, the higher frequency was” of sick fish, said Murawski.

But it is not just fish that are suffering. Ed Cake, a biological oceanographer, has “great concern” about the hundreds of dolphin deaths he has seen in the region in the last two years.  “Adult dolphins’ systems are picking up whatever is in the system out there, and we know the oil is out there and working its way up the food chain through the food web – and dolphins are at the top of that food chain.”

One study published last month suggested that the 700 dolphin carcasses now being examined, could actually represent a death toll of up to 175,000.

The federal government’s primary tool to hold BP accountable for the spill is through what is known as Natural Resources Damage Assessments. Currently there are hundreds of scientific studies being undertaken to work out how much money BP will have to pay for the ecological damage.

“Everything about this case is more challenging due to the scale and due to the uncertainty about the long-term effects,” argues Tom Brosnan of the National Oceanic and Atmospheric Agency, which is leading the federal government’s damage assessment effort. “The onus is on us to prove that if an animal is sick or dies that the oil actually caused it.”.

But there are studies that directly link BP’s oil to the problems. Dr Andrew Whitehead, an associate professor of biology at Louisiana State University, co-authored one study which was published in the journal Proceedings of the National Academy of Sciences in October 2011.

His work shows a direct link between BP’s oil and the negative impacts on the Gulf’s food web. “What we found is a very clear, genome-wide signal, a very clear signal of exposure to the toxic components of oil that coincided with the timing and the locations of the oil,” Whitehead told Al Jazeera during an interview in his lab.

Meanwhile tar balls are still being dragged up in the nets of fisherman and so the contamination continues.