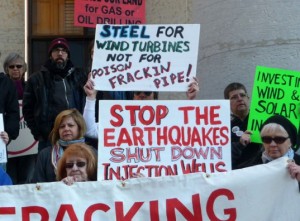 An independent report commissioned by the British government has confirmed that the controversial drill technique known as fracking did cause two small earthquakes, near Lancaster in North West England last year.

The company concerned, Cuadrilla, halted fracking after two minor quakes were recorded in April and May, with magnitudes of 2.3 and 1.5 respectively.

The report, written by independent experts and scientists, concludes that “the earthquake activity was caused by direct fluid injection” during the fracking treatment.

However the report then argues that “the probability of further earthquake activity is low”. But one of the report’s authors, Peter Styles from Keele University concedes “we believe it’s not possible to categorically reject the possibility of further quakes.”

Despite these risks, the experts then recommend that fracking can be extended throughout the UK.

The report also makes four recommends that all injections of fracking fluid must include a preliminary injection, followed by monitoring; that the growth of fractures in the shale should be monitored; that operations should monitor seismic events in real time and finally that operators should observe a “traffic light” regime, with quakes of magnitude 0.5 or above triggering a “red light” and an immediate halt, followed by remedial action.

The government is now going to consult on the report for six weeks, but commentators feel that it gives the green light for fracking expansion in the UK.

Mark Miller, Cuadrilla’s chief executive, welcomed the report. “We are pleased that the experts have come to a clear conclusion that it is safe to allow us to resume hydraulic fracturing, following the procedures outlined in the review,” he said.

Morever, as Damian Carrington points out on his blog this morning “The report fails to put to bed all concerns over seismic safety. But more importantly the crowded island we inhabit is very different to the wide open spaces of America, even if the gas fracker’s heroic guesses on how much gas may be under our feet turn out to be correct.”

This report only looked at seismic activity and not groundwater contamination. There is also an ongoing debate about how clean fracking is due to the leakage of methane. There is increasing evidence that shale gas could be dirtier than coal.

Another recent scientific paper also concluded that that current leakage rates of methane from natural gas “are higher than previously thought.”

If this report gives the green light to shale gas drilling in the UK, it will also delay the shift to a clean energy future.