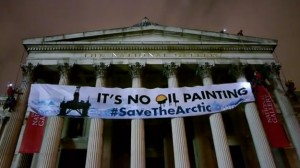 Last week I blogged on the landmark legal case against Shell by Nigerians that was being heard in the Supreme Court.

That’s not the only court-room Shell was in last week. In an extraordinary preemptive legal strike the oil giant filed suit against more than a dozen environmental organisations that Shell believes might challenge its drilling programme in the Chukchi Sea in the Arctic.

What Shell is trying to do is stop a further legal challenge on its Oil Spill Response Plan from groups like the Sierra Club, Defenders of Wildlife, National Audubon Society or Oceana.

While the groups have not announced their intention to go to court to challenge the company’s 450-page oil spill response plan, which was tentatively approved by the Interior Department two weeks ago, the company has every reason to think that they will and so is seeking to stop them.

“This is a very unique legal approach. I’m not sure anything like this has ever been done before,” Shell spokeswoman Kelly op de Weegh told the Los Angeles Times.

op de Weegh also argued “We’re confident that the approval of this plan met all legal and regulatory requirements and it’s certainly strong enough to withstand legal review, but we’d just rather start that sooner rather than later.”

But if Shell hoped their legal action would stop further legal challenges they are wrong. Peter Van Tuyn, an attorney for the Alaska Wilderness League, said a legal challenge to the oil spill response plan was “likely”.

Indeed, the New York Times argues that the “legal strategy taken by Shell is rarely successful.” Whit Sheard, a lawyer for Oceana, argues the group reserved the right to challenge the plan in court. He labelled Shell’s novel legal strategy as “frivolous,” adding “I’d suggest it’s either desperate or abusive in terms of the American legal process.”

David M. Uhlmann, who was the head of the Justice Department’s environmental crimes section from 2000 to 2007 and is now a professor at the University of Michigan Law School, adds “it’s not clear they [Shell] have a legal leg to stand on.”

In a related legal action in the US District Court in Anchorage, the oil giant attempted to send a chilling legal warning against Greenpeace, whose members last week boarded one of the drilling rigs now moored in New Zealand.

“The judge rejected most of Shell’s heavy-handed lawsuit, but too much still remains”, Greenpeace USA deputy campaign director Dan Howells said in a statement.  “This was one of the broadest attacks on peaceful protest we’ve seen in years”.