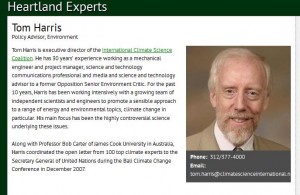 More bad news for the climate deniers at the Heartland Institute, which is still badly reeling from the controversial leak of information of its budget and strategy documents.

It has now been revealed that an associate of the Institute taught a course at a top Canadian university that contained over 140 false, biased and misleading claims about climate science.

Whereas the newly leaked documents revealed how it plans to spend $100,000 on a project countering established teaching of climate change to American school children, its affiliates have already been spreading misinformation in Canadian schools.

The 98 page report, entitled  “Climate Change Denial in the Classroom” was published yesterday by the Canadian Committee for the Advancement of Scientific Scepticism (CASS) and the Centre for Inquiry, Canada.

It depicts how “noted climate change deniers have gained access to the Canadian higher education system … These academics are closely associated with a number of organisations that have involvement with the energy industry.”

The course in question is at Carleton University in Ottawa and it was taught for four terms from 2009-2011 by Tom Harris, who is described by the Heartland Institute as one of its policy advisors on the environment.

Harris is not even a climate scientist but a mechanical engineer by training.

Richard Littlemore explains more of Harris’ background on DeSmogBlog: “Tom Harris, who originally trained as a mechanical engineer, has been a strategist for the climate change denial industry for at least a decade. A favourite presenter misrepresented as a PhD at the Heartland Institute’s regular climate change denial conferences, Harris has worked directly for companies like the international PR giant APCO Worldwide or for energy industry lobby firms such as Toronto’s High Park Group. More recently, he has launched or led at least three phony “grassroots organizations” – energy industry front groups that promote confusion or denial in climate science.”

Richard Littlemore continues: “Now, Harris is teaching at Carleton, passing on a mix of climate denial mythology and flat out fiction, telling students that the planet isn’t really warming, that (if it is), humans aren’t to blame, that (if they are) if might be a good thing and that, regardless, it’s just too complicated for mere scientists to figure out. (“The climate problem is so difficult that we might never solve it.”)

CASS report’s conclusions are equally damning. It argues that whereas “Carleton University teaches a range of courses on various aspects of climate change and the vast majority adhere to the highest academic standards … the content of this particular course is heavily biased against the scientific consensus concerning the anthropogenic causes of dangerous climate change.”

It continues: “Through an extensive audit of the course material, we identify 142 claims made during the lectures by the instructor, Mr Tom Harris, and various guest lecturers, that run counter to established scientific opinion. We review these claims and provide corrections, citing peer-reviewed scientific publications where appropriate.”

Finally it says that “it is important to note that the unbalanced nature of the course, the lack of peer-reviewed literature cited, and the non-science audience mean that the course fails to constitute ‘promotion of debate? and instead merely presents a biased and inaccurate portrayal of contemporary climate science.”

One of the team who wrote the report, Chris Hassall, told the Guardian the material was “fairly shocking really. To look through some of the claims and to find that he was spinning those things as either a scientific debate, or muddying the waters on the extent of the consensus in scientific literature, or providing theories that really lacked empirical evidence – it happened time and time again and we document it extensively.”

According to Littlemore, other Carleton professors describe the course as “a source of embarrassment to the institution.”