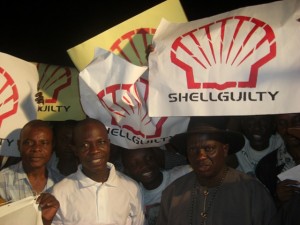 Although the BP / Deepwater Horizon trial maybe hogging the headlines, another courtroom battle is equally intriguing and important.

It is almost 3 years since the trial of Wiwa versus Shell settled for $15.5 million on the eve of the trial. Along with the Wiwa action, there was a parallel legal case, Kiobel Versus Shell, which is a class action against the oil giant which has been dragging its way through the courts.

The complaint has been led by Esther Kiobel on behalf of her late husband Barinem Kiobel, who was one of the Ogoni Nine hanged by the Nigerian dictatorship in 1995, along with the Ogoni leader Ken Saro-Wiwa.

Later today, the Supreme Court will hear a challenge brought by the plaintiffs who allege the Nigerian military, aided and abetted by Shell: “ engaged in a widespread and systematic campaign of torture, extrajudicial executions, prolonged arbitrary detention, and indiscriminate killings constituting crimes against humanity.”

At the heart of the case is whether corporations can be sued in U.S. courts for violations of human rights committed abroad.

The plaintiffs are hoping that the Supreme Court will reverse a 2010 lower court decision that ruled that corporations — unlike individuals — cannot be sued under a 200 year old law called the Alien Tort Statute.

There are many who believe that this decision was wrong and should be overturned.

“If corporations have rights then surely they have responsibilities too” argues Katie Redford, the co-founder and US Office director of EarthRights International, who successfully sued Chevron for human rights abuses in Burma under the Alien Torts Action.  She adds that today Shell will “argue that corporations are immune from laws that prohibit complicity in human rights violations and crimes against humanity.”

Redford asks “Can it really be the case that in 2012 corporations can go anywhere in the world and engage in such abuses as torture, killing and slavery, and yet be nowhere when it comes to facing their accusers and answering their calls for justice? That’s precisely what Shell will argue to our nation’s highest court today.”

Others agree that companies must be held responsible. Ralph G. Steinhardt, a law professor at George Washington Law School, has filed a brief representing international law scholars on behalf of the Nigerian plaintiffs. “The lower court in this case was alone among federal courts of appeals in concluding that corporations never — under any circumstance — have obligations under international law. Four other courts of appeals have explicitly reached an opposite conclusion.”

The Nobel Laureate economist Joseph Stiglitz also argues that it is in America’s self-interest to uphold stringent human rights standards among corporations.

Even the US government has filed a brief in support of the plaintiffs.

The long wait for justice continues, though. The justices’ decision is not expected to be announced until June.