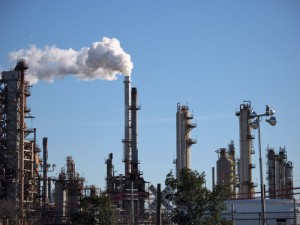 …in the long term, what the industry has affected is not increased security via Canadian oil to the gulf coast, but a concentration of the nation’s refining capacity in the heart of the nation’s hurricane corridor.  The lessons of 2005 have clearly not been heeded.

Pennsylvania labor activists marched on Capitol Hill yesterday in protest against the shutdown of three refineries in the state. Politicians from both sides supported them in their call to stem the job losses and address the imminent threat to the nation’s energy security that the loss of gasoline production in the east coast now poses.

The refining companies (Sunoco and ConocoPhillips) were quick to respond with the lame retort that some of these labor unions and politicians were supportive of failed cap-and-trade legislation that would have killed the east coast refining industry if it had been successful. What the actual impact of the failed cap-and-trade legislation would have been on the refining industry is debatable, what the refiners actually did was close ranks with their competitors by failing to mention the root cause of the failure of east coast refining. The increasing concentration of the nation’s refining capacity in the US Gulf Coast.

It is an overt strategy and is significantly based on the expected riches of processing low quality tar sands crude that would be delivered to the gulf coast by the Keystone XL pipeline.

A new refinery has not been built in America since 1976. However, through expansions and upgrades refining capacity in the gulf coast has grown over 1 million barrels per day since 2000 and is set to grow a further 325,000 b/d when the Motiva (Shell and Saudi Aramco) Port Arthur refinery commissions its latest expansion later this year.

Many of these expansions, including Motiva’s as well as those by Valero, Marathon and Total, have not just increased capacity but have been designed to enable these refineries to process greater quantities of heavy sour oil such as that derived from Canada’s tar sands. While heavy oil has always been delivered to the gulf coast from countries such as Venezuela, Mexico, Saudi Arabia and Kuwait, the timing of some of these expansions, and in some cases the stated intention, is to prepare for increasing quantities of Canadian tar sands oil that would be delivered by the Keystone XL pipeline.

The gulf coast refiners will do well out of this strategy for a number of reasons. Heavy sour oil is cheap because its low quality requires special equipment and not all refineries have this equipment. Therefore its market is limited putting the refiners at a market advantage. This is especially so as Canadian production has been booming due to rising tar sands production. Investing in that equipment is expensive but has been cushioned by favorable tax treatments that enable accelerated write offs and amount to billions of dollars in subsidy from the American tax payer.

However, gasoline prices are set by the most expensive source in the market’s pool of crude oil sources and therefore heavy oil refiners are making hefty profits out of the heavy oil discount.

But east coast refineries do not have the pipeline connections to western Canadian oil, and have historically not had access to the Latin American heavy crudes, so they did not invest in the heavy oil processing equipment. They were stuck relying on expensive light oil imports which squeezed their profit margins and led to their demise.

Meanwhile, certain gulf coast refiners have been tightening the screws further. Valero, with six major refineries on the gulf coast, many of which have significant heavy oil capacity, has been investing in European refineries with a view to exploiting the gap between diesel and gasoline prices in the Atlantic Basin (see graphic below). That means selling diesel into the European market while selling surplus (read cheap) European gasoline into the U.S. east coast market. A barnstormer of a profit making scheme for Valero; a final nail in the coffin of east coast refiners. 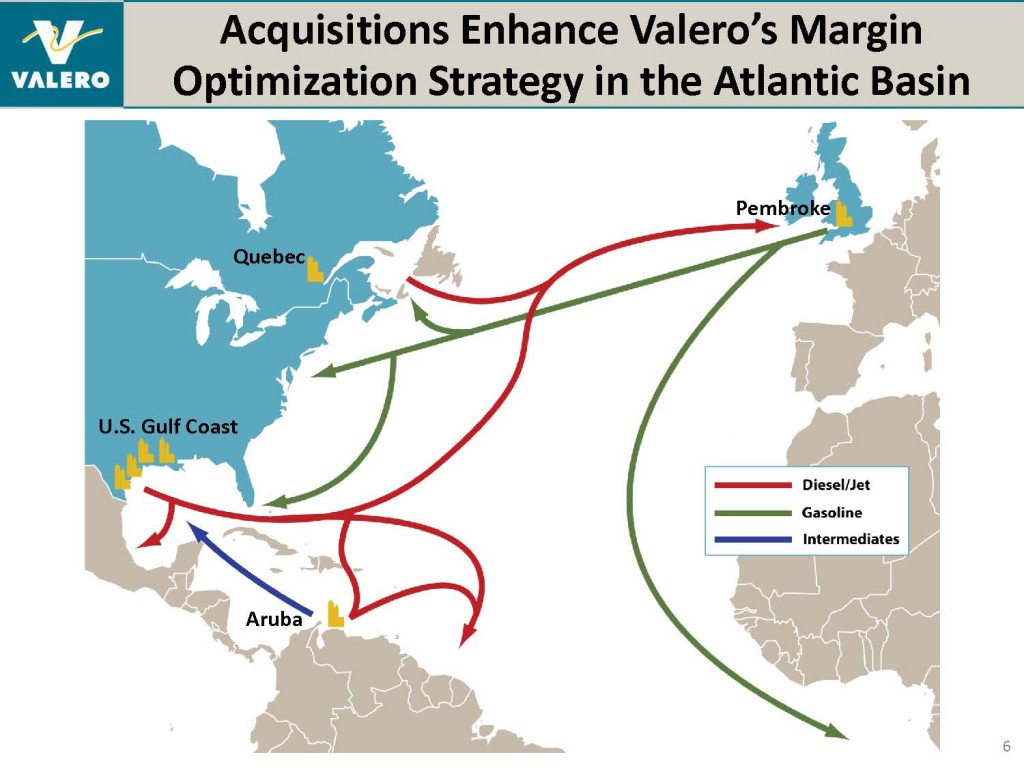 The result is great for the Canadian oil industry (if it gets its pipeline), great for gulf coast refiners, but has been devastating to east coast refiners. It is also quite detrimental to overall U.S. energy security.

The capacity to move gasoline and diesel from the mid-west and gulf coast refineries to the east coast will come, although will probably not come in sufficient quantity this year to prevent a painful price spike on the east coast this summer. But in the long term, what the industry has affected is not increased security via Canadian oil to the gulf coast, but a concentration of the nation’s refining capacity in the heart of the nation’s hurricane corridor.  The lessons of 2005 have clearly not been heeded.

In the end, the profit maximization maneuvers of the oil industry will never truly serve the nation’s energy security interests. The U.S. will never be able to insulate itself from the vagaries of the global oil market. That politicians and the public continue to swallow the industry’s rhetoric on energy security is a sad state of affairs precipitated by multi-million dollar advertising campaigns and a bought-and-paid-for Congress.

A price on carbon may serve us better by encouraging efficiency and diversification away from oil. Moving the oil pieces around the board, within the United States, North America, or around the world, simply maintains the status quo, and the U.S. is as vulnerable as ever to the global oil hegemony.