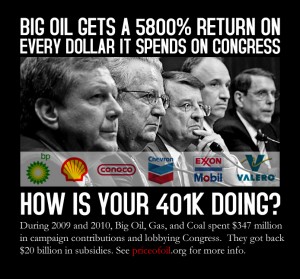 What if you were in Vegas, and a friend told you there was a slot machine in the corner that was giving out $59 for every $1 that was put in?  You’d think the machine was broken, and that it was rigged.

Clearly this is a scam, but if you’re the oil, gas and coal industry, it’s legal and business as usual in Washington. For every $1 the industry spends on campaign contributions and lobbying in DC, it gets back $59 in subsidies.

Divide total subsidies by total money spent by the industry and you get 59.

(Note that an earlier post touched on this topic of return on political investment but did not include the lobbying figures and included conservative estimates of subsidies).