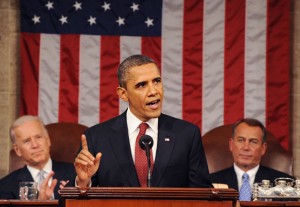 Great post from David Roberts at Grist. The reaction from independents to Obama’s clean energy messages in the State of the Union speech is encouraging. Big Oil is the 1%. Clean energy translates into jobs that Americans can support. It’s time for all involved to press the advantage. We cross post here with thanks to Grist.

During Obama’s State of the Union speech, Democracy Corps ran a dial-test focus group. Fifty swing voters were given devices that let them register approval or disapproval continuously throughout the speech. Two results in particular are worth highlighting.

Overall, there was a striking degree of unanimity, quite in contrast to the polarization in Washington. Reactions to the speech split along party lines on only a few issues. The most interesting split came during the section of the speech on energy:

This section received the highest sustained ratings of the speech from Democrats and independents, but it was also one of the few polarizing sections as Republicans reacted negatively to the President’s call for more support of clean energy (independents, like Democrats, responded very favorably). Overall, Obama gained 22 points on the issue, one of his biggest gains on the evening, as these voters endorsed his appeal to end subsidies for oil companies and instead focus those resources on expanding clean energy in America. [my emphasis]

It seems the Republican attempt to drag clean energy into the culture war has reached only the conservative base. Independents outside the Fox-Limbaugh loop still favor it.

In other words, this is a powerful wedge issue that favors Democrats.

It’s an empty threat. The fact is, overwhelming majorities of Americans — across party, age, and regional lines — support clean, modern energy. A poll conducted by ORC International in November found that 77 percent of Americans, including 65 percent of Republicans, believe that “the U.S. needs to be a clean energy technology leader and it should invest in the research and domestic manufacturing of wind, solar, and energy efficiency technologies.” Last February, a Gallup polloffered a list of actions Congress might take. The most popular option, with an incredible 83 percent support, was “an energy bill that provides incentives for using solar and other alternative energy resources.”

Americans love clean energy. When they hear about green energy infrastructure, according to the focus-group results …

… participants immediately make the connection between new energy and new jobs. They say, “Alternative energy — good jobs, local jobs — I think we have a tremendous opportunity here — it’s about creating goods and services — invest in infrastructure.”

On to the second significant finding: Americans want to tax the rich.

These swing voters, even the Republicans, responded enthusiastically to [Obama’s] call for a “Buffett Rule” that would require the wealthiest Americans to pay their fair share. As one participant put it, “I agree with his tax reform — the 1 percent should shoulder more of the burden than the other 99 percent. He [Obama] talked about being all for one, one for all — that really resonated for me.” These dial focus groups make it very clear that defending further tax cuts for those at the top of the economic spectrum puts Republicans in Congress and on the Presidential campaign trail well outside of the American mainstream.

What this shows is that the Occupy movement has won. Americans across party lines increasingly see things in terms of the 1 percent and the 99 percent. A Pew survey earlier this month found that “conflict between rich and poor now eclipses racial strain and friction between immigrants and the native-born as the greatest source of tension in American society.” Two-thirds of Americans now see “strong conflicts” between the rich and poor. Even Mitt Romney is using Occupy’s language.

These issues — clean energy and taxing the rich — are not unconnected. Properly done, clean energy is a populist issue. Big Oil perfectly symbolizes the 1 percent, and Americans are ready to redirect public resources away from oil and toward a wide network of home-grown cleantech innovators.

Clean energy isolates the Republican base from the broad mass of American opinion and, in particular, from swing-state independents. It’s a wedge issue and an electoral winner for Democrats if they can quit playing defense and go on the attack. The appropriate response to threats from the U.S. Chamber of Commerce is a well-administered ass kicking.

David Roberts is a staff writer for Grist.